Book Review: To Dust You Shall Return | Author Fred Venturini 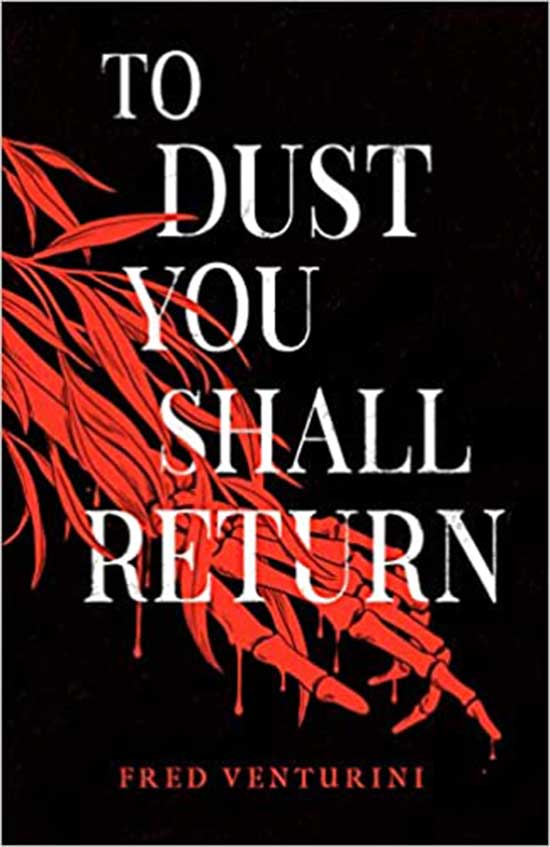 To Dust You Shall Return

There is something dreadfully amiss about the sleepy town of Harlow. Each of the residents have an allegiance to the leader border lining unholy or unearthly proportions. Their leader, simply known as The Mayor seemingly has the population under his sinister spell.

Curtis Quinn, a man with his own checkered past finds himself within Harlow searching for answers to so many questions about his late finance Kate. The love of his life fled the small town into his arms, only to be tortured by the lingering memories. Harlow had a hold on her like no other.

Beth Jarvis, a young woman residing in Harlow has also had enough of the towns’ way of life and the Mayor’s protocol. Her plans at a swift departure to never look back again may be dramatically thwarted. Once Quinn arrives on the scene, his presence may very well prove to be too late to make a difference. Yet his last stand with The Mayor may very well be the end of civilization as we know it.

Throughout the past year to year and a half people’s reading habits and rituals have no question been altered. Societal isolation has a tendency of accentuating one’s recreational reading. You do not have to be an introvert to rejoice within these times. Perhaps most noteworthy is we have opportunity to stumble across and discover an author’s endeavors we may not have been familiar with on prior occasion.

Fred Venturini fits the bill in this case much to the chagrin of this avid reader. To Dust You Shall Return marks the inaugural voyage this critic has taken with the author. Rest assured further unchartered waters shall be explored.

It is evident Venturini knows his craft well. He tends to follow the carnal rule of any writer in simply writing about what you know. It does not take long for the reading audience to become privy to the fact he has had some experience with small towns and the manner in which the occupants conduct him or herself. The sheer quirkiness of the characters is comical from time to time and provides the necessary levity in breaking the pure sense of foreboding on the horizon.

The characters within Harlow are complex yet inspire the reader to embark further into the reading fray to get to know the key players. What motivates Marcus Jarvis? What likes behind the darkness within Curtis Quinn? Why does Beth Jarvis feel the unrelenting need to flee? As we subconsciously probe further into the characters, the questions continue to multiply. The author has a certain knack for accentuate the readerships sense of curiosity and refuses to relent until the final pages.

A sense of elusiveness surrounding the character of the mayor is highlighted. Venturini enhances the plot escalation while utilizing the less is more philosophy. What I truly admire most about this technique is the author invites the reader to become further invested into the story line and its pace but filling in our own conclusions. A version of what the mayor may turn out to be may very well differ dramatically from one reader to the next. He keeps us engaged page by page, until the spell binding conclusion.

Of course, with any effective suspense genre plot, conflict is prevalent. The adversity that lies between Beth and her father is especially noteworthy. The tension on the pages between the two is nothing shy of electric. We, as the reader desire on much more than a subconscious level to see what fate lies ahead for girl and father.

Perhaps the most apparent but impactful conflict exists between the actual town of Harlow and its residents. The psychological hold the mayor has on the populous is eerily fascinating. It is the sort of thing that reminiscent of perhaps a Twilight Zone episode. Author Fred Venturini captures the unease with alarmingly effective ease.

Undeniable is the conflict Curtis Quinn has within. As much as he tries and as numb as he is to the memory, he blames himself for the death of his beloved Kate. To coin a cliché, he simply will not rest until he gets to the bottom of what caused her tragic death.

To Dust You Shall Return unfolds in an alarming climax most readers simply will not see coming. Venturini cements his legacy within the horror genre. I for one simply cannot wait to embark upon further chilling tales from this wordsmith.