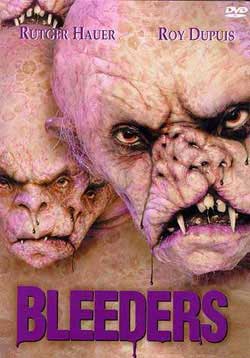 The victim of a mysterious disease that has the doctors stumped, John Strauss (Roy Dupuis) flies to an island where his relatives are rumored to live, in search of a genetic explanation. But the subterranean creatures he finds are barely even human — and their hunger for human flesh is an obvious health hazard. Can John reconcile his feelings for his nontraditional “family,” or will he help a vengeful scientist (Rutger Hauer) wipe them out?

From A-Pix, the company that brought you such lovely pieces of sh*t as “Breeders” and “Uncle Sam,” comes another horrid excuse for entertainment, this time disguised as the movie “Bleeders.” This film was formerly (and more inspired) titled “Hemoglobin,” but A-Pix changed it because I don’t think they knew what hemoglobin was. So, they just took a title that was already taking up space in their brains and switched one letter, so as not to overexert themselves. As if that didn’t hint enough as to the quality level of this flick, the script had been kicking around Hollywood for close to ten years before its auspicious debut, and they brought in Peter Svatek, who’s “Witchboard: The Possession”-boasting-resume doesn’t beat out the stiff competition for the dubious rewriting honors.

The plot (and I use the term loosely) starts off in France during the 17th century (18 century? Who gives a sh*t?). There, an aristocratic family named the Van Dams is heavy into the credo “If you can’t keep it in your pants, keep it the family.” Now, that’s all well and good until the King (Louie? Francis? Again, who gives a sh*t?) decides it’s time to outlaw incest upon discovering the genetic defects it causes. So, the Van Dams flee to the states, where the good, old red, white and blue protects their God-given right to %$%*@ each other. And so, they take up residence in a small house in an equally small fishing community in Maine. There, they keep to themselves, and continue knocking each other up, until they (as legend has it!) eventually faded away.
Flash forward to what can only be assumed is the present.

A pale man by the name of John sails into a small port town in Maine with his (rather hot) wife. Once he arrives, Johnny starts hemorrhaging from the nose, and is magically whisked away to the local medical facility. In this case, the facility is the doctor’s (Rutger Hauer….yep, you read that right) kitchen table. The good doctor’s sucking on a bottle of scotch, while John-John’s having a seizure over a blood loss equivalent to two-thirds the amount I lose after pulling off a hangnail. Rutger shoots him up with God-knows-what, and discovers (through no fault of his own) that John has a congenital blood disease. Gee, I wonder if it’s because he’s related to the Van Dams, whose family %$%*@ fiasco has the tendency to cause such defects?

Coincidentally, right after this disease is discovered, we find out that John came to town to look for his long lost family, who, as the viewers may or may not know (depending on how adept you are at deciphering poor, direct-to-video clues) have been hiding in the basement of the old house. The old house, however, has now been converted to a hotel/funeral home. Okay, now The Professor has slept and a bevy of undesirable locations, but “anything/funeral home” is where I draw the line. Can anyone in the class spell “Bates” for me?

Unfortunately though, there are no similarities to Psycho. Instead, there’s a bevy of stupid ideas, dumb characters, and bad acting. I’d say bad scripting, but such a minimalist script could hardly be deemed “bad,” as there’s really not enough dialogue to make a clear judgment. But don’t get me wrong, because what’s there isn’t worth listening too. So, to continue retelling this mystic tale, the Van Dams have been down there in the basement, breeding, mutating, digging tunnels under the cemetery, eating the corpses– you know, all that fun stuff you wish you and your family would do on the weekends. Once the cemetery runs out of bodies, the hungry freaks start feeding on the living. So, that’s where I’ll leave the story. I don’t feel like getting any more involved, and I fear I’ve gone too in-depth as is.

There’s not much I can say in favor of this movie. Nothing about it even remotely resembles something worthy of praise. Rutger Hauer gives the only thing close to a decent performance, and let me tell you, that ain’t saying much.. The direction is stale, as is the scenery. In fact, the whole %$%*@ movie is pretty much boring. Allow me to illustrate just how boring: A-Pix usually has some sort of lame box-art gimmick to go along with their hopeless releases. Just picture what William Castle would have done had he not died the year they introduced video. “Breeders” had a cheap, plastic relief of the procreating monster on its cover, and “Uncle Sam” had a sh*tty hologram that wasn’t half as cool as the hologram on the “Jack Frost” box. In the same vein, “Bleeders” had a thin, clear plastic pocket over the front cover with a thick, red, molasses-like substance seeping around underneath that The Professor can only assume was supposed to be blood. However, this gimmick couldn’t have been too lame, for it proved to be more entertaining than the actual movie, as The Professor found himself more interested in making the goo move around under the plastic than watching the %$%*@ movie.

And just when you think what you’re watching couldn’t get any more boring, a half-assed sex scene is tossed in for good measure. So half-assed in fact, that that’s about all you see – half an ass. There’s no real sex, and all the stripping leads to is some kissing and a couple of tears. However, the girl who gets nude is pretty hot, so it isn’t an entirely wasteful scene. But the catcher is that she’s only naked for a whole 20 seconds. The Professor now realizes he has taken entirely too much time to probe the workings of this sex scene. He will move on.

Another formidable quality is the abundance of clichés. In a truly trite moment, the girl who hasn’t spoken a word since she was six decides its time to speak when one of her friends is murdered at the hands of a ghoul. It’s just a damn shame her preferred vehicle for fifteen some odd years of repressed silence is a lame, action-flick one-liner. “No %$%*@ way!” she proclaims with minimal feeling. But, then again, what could you expect from a mute? It’s not as if she has time to finely hone her craft of delivering corny one-liners.

Even the climax fails in its attempt to be a touching sequence. John decides to save his endangered family members and live out the rest of his life where he says he belongs. Because I’m real sure everyone is curious, the narrator leaves us with this useful information, and I quote “John was reunited with the Van Dam family, and he found that he too had a twin, and although his sister could make love to herself, she welcomed her long lost brother, and loved him too.” Gee, I’m real sorry, Mr. Narrator, but that information falls under the category of ‘Things The Professor could have lived his entire %$%*@ life without knowing.’ ” And, as if that wasn’t bad enough, the sister appears to be a cross between Linda Trip, Mama Cass and Gilbert Grape’s mom. In the films final shot, John gazes upon his newfound home, his newfound lover, and his newfound family, and then looks at himself in the mirror with a face that just says “I should have stayed with my hot, young wife.” The Professor feels your pain, John. I found myself with a similar thought as I gazed upon “Critters 2,” which was slightly lower on the shelf than “Bleeders.” “Should have rented that again,” I thought.

MONEY SHOT: I’ll be damned if there was anything in this picture worth seeing again.