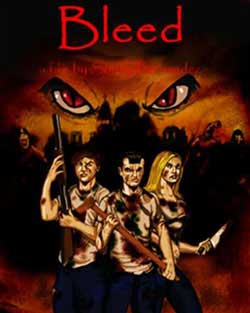 Six strangers wake up on a street corner…they have no idea how they got there, or why they’re there. They quickly realize that they are trapped and alone in a small town, unable to escape, and everynight creatures from their worst nightmares stalk the streets. But soon they will realize that their are things far worse than monsters….

First things first: Sonny, you motherf*cker! Sonny Fernandez, director of THE LAST BATTLEGROUND, knows how to get a viewer’s attention. I wasn’t even in my seat yet before I heard one of the most bloodcurdling screams of my life, at full volume, blaring from my TV. Before the movie even started, in the menu screen, I was jarred into complete focus by that scream for my 2nd Fernandez feature in as many days, BLEED. It’s a simple trick, but very effective and one that’s often overlooked by production houses who have to cut their films for the MPAA, which makes them forget how to actually scare people when it comes time to release that “unrated version” DVD.

And that’s how BLEED begins. From there, no time is wasted in introducing us to a bunch of kids who all suddenly sleepwalk. They don’t know why they’ve all descended upon a one-light street corner at the same time; they don’t even remember walking there. Dismissing it as a coincidence, albeit a really f*cking strange one, the characters split off to go home, only for each of them to come face to face with creatures and situations that are either completely terrifying, absolutely insane, or a little bit of both. From there, it’s time to pray, to run, and to survive.

Let’s just get it out of the way right now: the acting isn’t all there. BLEED, perhaps more apparently here than in THE LAST BATTLEGROUND, is a work put together by friends and fans; some can act (Cody Tergesen was really pretty good), others can’t. No-budget horror is notorious for that, and it’s not any different here. Lighting is again an issue, as in BATTLEGROUND; although everything is visible, nothing’s particularly crisp in low-light situations, which can make for a grating viewing experience. And to my dismay, the music didn’t always fit the situation, with some scenes even bearing a Seinfeld-esque bass-line instead of a tense, atonal jumble of disorienting notes that might serve to be more appropriate. In seeing BATTLEGROUND first, I was hoping for the music to be as on-point and urgent as in that film, and saw the difference to be a bit of a letdown.

Once again, though, mood and characterization shine through in BLEED, in what I’m hoping proves to be a motif in all of Sonny Fernandez’ work. The characters are simply and properly motivated, and they’re not dumb in the least. And for special effects that, honestly, anyone could do, the framing of many of the shots made for very tense and truly scary moments. Slow motion was put to good use in a couple of key fright scenes, and the lack of lighting in some scenes actually forces the imagination to fill in a few of the gaps, making for a more frightening setpiece.

The best aspect of the film, though, is that the viewer isn’t fed everything. Explanations are few and far between; evil just happens, scary sh*t happens and no one, from the characters to the viewers, know what the Hell is really going on in any particular moment. For a quick associative reference, think SILENT HILL with less money for Christophe Gans to blow, or some of the dead-town scenes from the PHANTASM movies. There’s a lot of desolation and speculation, but the facts and revelations are left up in the air. Sometimes, when the ideas are boring, such obfuscation of the story can be a really bad thing. But here, thanks to a well-written script from Fernandez, the device actually adds intrigue. Elements of repetitive-nature scenes from movies like DEAD END of IN THE MOUTH OF MADNESS are present, and these establishments do a lot to push the story and the dread contained therein along at a rewarding pace.

Shortcomings? Sure, BLEED has them. For Minnesota-based, no-budget horror, my arrogant city-boy mind has me thinking, “well, what the f*ck did you expect?” And in the tradition of THE LAST BATTLEGROUND, these shortcomings could do a lot to draw the casual horror fan right out of the movie and into…well…anything else. For the connoisseur of horror film big and small, however, BLEED has a lot to offer.

I liken the experience to seeing an episode of Catch a Rising Star back in the day. It was a late-night comedy showcase that featured young, upstart stand-up comedians who were new to the scene. Not everything worked, but the show gave viewers the opportunity to see works in progress plying their trade. Through the program, one could see talent shining through, could see the stars of tomorrow getting their feet wet in the business and working through growing pains to become the polished, refined talents they would one day become. BLEED gives me the exact same feeling I had in watching that show all those years ago.

I see this and I see that Sonny Fernandez and some of his crew have real, solid futures in horror. The film is by no means perfect, but it’s scary despite its flaws, and in that it does something that’s rather rare in all of horror cinema, no matter the budget. It gives me hope. I look at BLEED, marvel at how enjoyable it is for being the ultimate in DIY, and think of the kind of movies Fernandez and Co. could be making a decade from now. Those are movies I’m really excited to see. And as for BLEED…I’m still not turned off of these Sonny Fernandez features. Bearing solid horror, just enough humor and unmistakable passion for the genre, it’s a movie that horror die-hards should really give a shot. 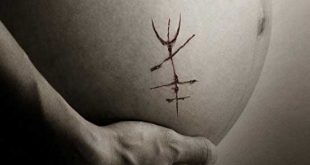