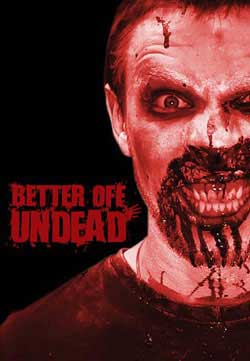 Marcus, Chris and Evan find themselves stuck in any normal day, when without warning, zombies begin to infest the city. Not knowing exactly what to do, the three attempt to seek shelter at Marcus’ house, but first they have to get there.

Facing the undead, Marcus, Chris and Evan try to survive the zombies and each other. Written and directed by John Pata, and starring Drew Schuldt, Dale DeVries and Jordan Brown, BETTER OFF UNDEAD was filmed in Oshkosh, WI and features music by The Lemurs, Lead Me Not, Johnny and the Phux, and The Suicide Machines.

It’s always good to see young filmmakers take the helm and produce a new product. Better off undead is one such film. 26 Minutes doesn’t qualify for a feature but it still entertains none the less. Now before you read any further, I know what your sayingf….not another Zombie film! Well conceptually zombie films are easier to articulate due to minimal makeup and minimal action shots. So when another comes along, we of course want to see a little more than a bunch of hungry folks biting into bodies and getting shot in the head.

The film takes place in a local suburb where 3 friends find one day the world has gone to sh*t. Zombies now walk the Earth and its kind of putting cramp in their day. The days are pretty much filled like most teens. Daily ribbing in conversations which goes from cutdowns to a day in the life of the young and restless. Marcus constantly picks on Evan, the group douche bag while Chris eggs them on and provides the comic relief. To help curb the stress of a zombie outbreak they indulge in alcohol and occasional fantasies. If they can get along long enough they just might kill off a few creatures of the undead in the process.

Director / writer John Pata, obviously set out to make a product that doesn’t require taking out a grant to finance and still create something he can show to potential buyers. I don’t blame him, filmmaking is expensive business. Where the charm comes in is in the ability to show us details on screen and clever dialog. The premise might not be the most groundbreaking this side of the planet but it makes up for it in other areas. Better off Undead is a horror comedy or “splat stick as they call it, which happens to boast alot of “d*ck jokes.

The jokes though are done in a interesting way that they don’t entirely overwhelm but still give the audience something to laugh at. You get the sense of 3 friends hanging out and having a local zombie problem to deal with to boot. In some respects this echo’s a “Clerk” approach but adds the horror element as well. The 3 actors characters Martin, Chris and Evan obviously have a dynamic together as they play off of each other like if you were to video tape a bunch of your best friends. FX are minimal but clever for the strength of the shots needed. Even things like dolly shots are achieved cheaply by filming from a moving vehicle.

This off the cuff approach in many respect has so much more value as a new filmmaker than having the advantage of 1000 of dollars worth of equipment to achieve the same results. Editing was pretty decent as well, using alot of modern techniques and shots that cut to enhance the impact of the scenes. Lastly I think many folks will leave this open with a smile on there face which balances nicely with the grocery store bought gore scenes.

The DVD features a nice helping of extras that help us see into the production and filmmaking issues that occurred along the way. Better off undead is still an impressive first outing for these folks that should do well at festivals. They’ll have to add another hour to the production if they want to shop distribution, but it may just serve as a good lead in for financing. The film has nice balance of humor and gore that fans of Shaun of the Dead type films will dig it.