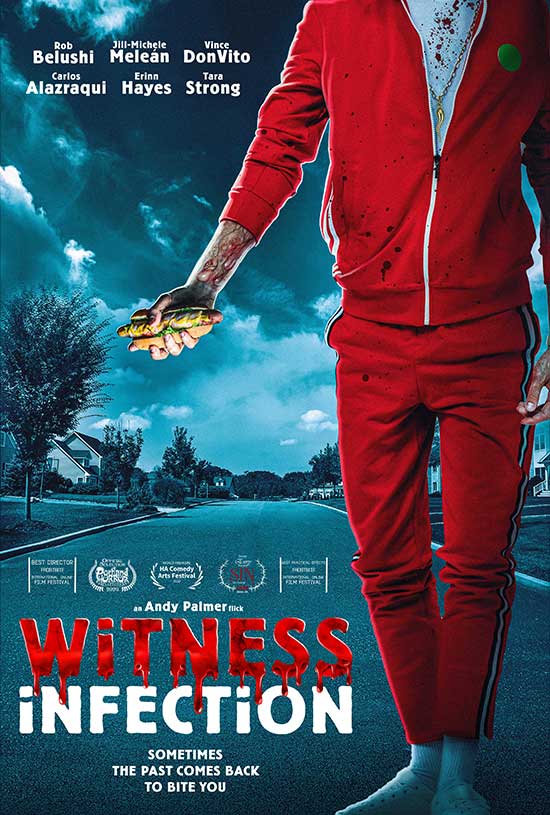 Freestyle Digital Media has announced the cable, satellite and Digital HD release of Witness Infection, from filmmaking team Carlos Alazraqui and Jill-Michele Melean and director Andy Palmer. WITNESS INFECTION will be available to rent and own on North American digital HD internet, cable, and satellite platforms and DVD on March 30, 2021 through Freestyle Digital Media.

Winning Best Feature at the Horror Hound Film Festival and Best Director at the Frostbite International Film Festival, and showing at several others including Portland Horror Film Festival, HA Comedy Arts Festival and more, Witness Infection is being lauded as “a wild ride of raucous fun” (Horror Buzz). The feature film by Andy Palmer has been entertaining audiences at film festivals, gathering up its very own cult following even before its wide release. This stomach-turning comedic horror/ mob movie mash-up is now poised for a March 30, 2021 release. WITNESS INFECTION will be available to rent and own on North American digital HD internet, cable, and satellite platforms and DVD on March 30, 2021 through Freestyle Digital Media.

“I’m so excited for the release of my third feature collaboration with Carlos Alazraqui. And the fact that he and Jill-Michele Melean trusted me to bring one of their scripts, Witness Infection, to life makes it all the more special,” said filmmaker Andy Palmer. “I’m extremely proud of Witness Infection, and hopefully we do for eating sausages from a questionable looking food truck what Jaws did for swimming.”

Witness Infection premiered at the 2020 HA Comedy Arts Festival and went on to screen at festivals around the world, picking up awards for Best Feature at HorrorHound and the Die Laughing Film Festival, Best Director at Die Laughing and the Frostbite Film Festival, and the Audience Choice Envy Award the Sin Film Festival.

Synopsis: Witness Infection tells the story of two rival mob families who are transferred from the Witness Protection Program to the same city by mistake. Life has always been pretty protected for Carlo Serrelli. But his past is about to come back and bite him. Carlo’s father has kept him out of the deadly mob business by giving him a job at the family dog groomers, while his younger brother, Dominic, has always done the dirty work.

All that is coming to an end as Carlo’s father has to force him into an arranged marriage with the daughter of the rival Miola family boss. Carlo’s two best friends, Gina and Vince, vow to help him get out of this predicament, but they all get in way over their heads when a serious infection starts eating the town. The good news is that Carlo may not have to get married after all — but the bad news is that everyone might die.