BLACK HOLES: THE EDGE OF ALL WE KNOW | Directed by Peter Galison | Available on VOD March 2, 2021

“Peter Galison’s film does a superb job of conveying the life of science – the passion, the wonder, and the comradery forged by a group of people working together to fathom this strange cosmos we live in” – Alan Lightman, writer/physicist, MIT

BLACK HOLES:
THE EDGE OF ALL WE KNOW

A documentary following the quest to understand the most mysterious objects in the universe, featuring Stephen Hawking, Shep Doeleman and The Event Horizon Telescope, among others 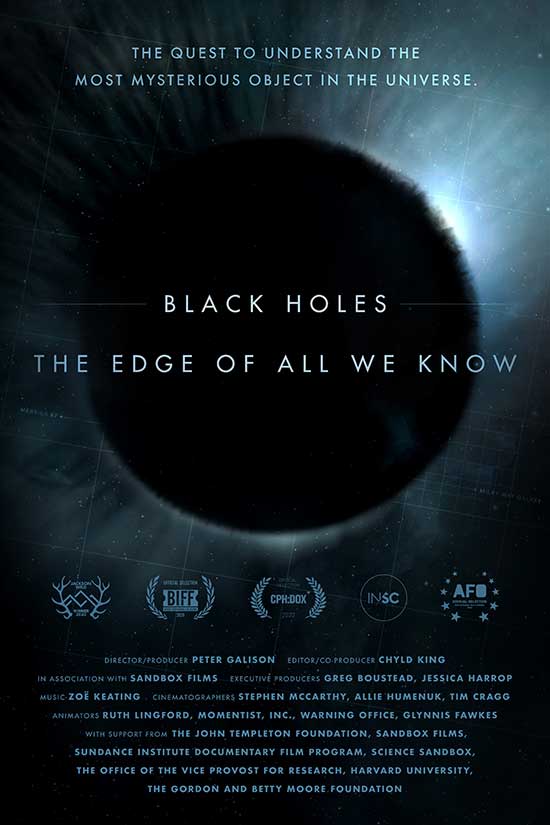 Directed by Peter Galison (Co-Founder, Black Hole Initiative at Harvard)
With a score by  Zoë Keating

Featuring
Shep Doeleman, Founding Director, Event Horizon Telescope
physicist Andrew Strominger,
theoretical physicist Malcolm Perry,
Co-Founder/CEO Unitary Sasha Haco  (Black Hole Entropy from Soft Hair)
and Stephen Hawking
What can black holes teach us about the boundaries of knowledge? These holes in spacetime are the darkest objects and the brightest—the simplest and the most complex. With unprecedented access, Black Hole | The Edge of All We Know follows two powerhouse collaborations. Stephen Hawking anchors one, striving to show that black holes do not annihilate the past. Another group, working in the world’s highest-altitude observatories, creates an earth-sized telescope to capture the first-ever image of a black hole. Interwoven with other dimensions of exploring black holes, these stories bring us to the pinnacle of humanity’s quest to understand the universe.

Peter Galison is a physicist/historian of science/filmmaker at Harvard University. In 1997, he was named a MacArthur Fellow; with his Event Horizon Telescope colleagues, Galison shared in the 2020 Breakthrough Prize in Fundamental Physics for the first image of a black hole. He is a co-founder of the Black Hole Initiative at Harvard, an interdisciplinary center for the study of these most extreme objects.

His documentary film (with Pamela Hogan, 2000) probed the moral-political debates over the H-bomb: “Ultimate Weapon: The H-bomb Dilemma.” He and Robb Moss co-directed “Secrecy” (2008), on national security secrecy, which premiered at Sundance. The two also co-directed “Containment” (2015), about the need to guard radioactive materials and warn the 10,000-year future. Galison partnered (as dramaturg) with South African artist William Kentridge on a multi-screen installation, “The Refusal of Time” (2012) and an associated chamber opera. He is also the author of several books, including “Image and Logic”; “Objectivity”; (with L. Daston), and “Einstein’s Clocks, Poincaré’s Maps.”