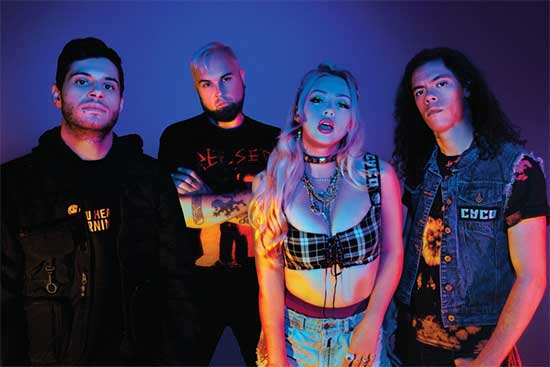 Canadian alt-metal crossover stars SUMO CYCO are about to transcend into an explosive new era with their upcoming full-length, Initiation, scheduled for release on May 7, 2021 via Napalm Records! Interlaced with infectious heavy metal grooves, pop-perfected hooks, electronic undertones and a dose of punk flavor, Initiation breaks all the rules while delivering a cohesive yet purely unbridled sonic adventure.
SUMO CYCO has cemented their name by garnering an impressive legion of fans with their hardworking attitude and storybuilding prowess. With Initiation, SUMO CYCO takes it to a whole new level – demonstrated by their new single, “Bystander”! Crowned by expert, airtight vocal domination from Juno-nominated pop star-turned-rock frontwoman Skye “Sever” Sweetnam, the track features an aggressive, fast-paced attack of low, grooving metal riffage, relentless drums and slinking electronic accents. Its accompanying music video reflects the track’s energetic, chaotic vibe with sharp, vivid visuals. Don’t just be a bystander, check it out now!
Frontwoman Skye “Sever” Sweetnam says about “Bystander” and its video:
“‘Bystander’ was inspired by the frustration of our lives turning upside down in this pandemic. I felt like instead of living my life, I was now a slave to a screen, watching the world fall apart right before my eyes, totally helpless. The music video depicts my character trapped in a floating house watching news events taking place on TV, and at the same time, right outside my window. This entire video was produced, filmed and edited by Matt and I in our home studio!”
Initiation invites a mass of new followers into their warped, dystopian-like world of “Cyco City”! As with its predecessors Lost In Cyco City (2014), Opus Mar (2017) and countless singles, Initiation is based in the imaginative conceptual location of “Cyco City”. But unlike most concept albums, the lyrical content is inspired by the band’s real-time environment – featuring timely, personal themes of love, sacrifice, anxiety, empowerment and more that all listeners can relate to. 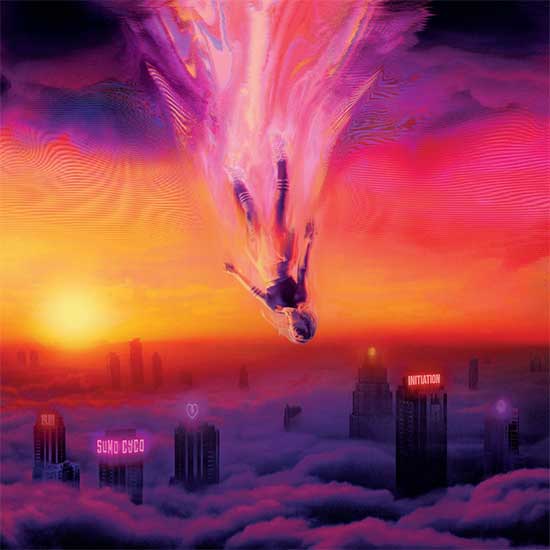 Sweetnam adds about the album:
The album’s title, Initiation, stems from wanting to invite the audience to be “initiated” into our world. There are usually two congruent themes to each of our albums – one is real-world inspiration, and the other is “Cyco City”, a comic book-esque alternate universe where all our music videos take place. With Initiation, we introduce four gangs or clubs. Our music videos for Initiation all include a theme of these clubs – whether it’s gang vs. gang, a forbidden love between opposing sides, or the idea of having to choose where you belong.
At the album’s start, SUMO CYCO lights a spark with the seductively hooked track “Love You Wrong”, connecting like a punch and setting the stage for the vigor to come. The blitz continues with standouts like lethal room-mover “Bystander” and electronic-infused, in-your-face rock anthem “Vertigo” – the latter standing tall with its airtight, gritty pop sensibility and featuring the production mastery of Juno Award-winning producer Kane Churko (Ozzy Osbourne, In This Moment, Papa Roach). Swiftly followed by erratic, addictive nod-to-the-times “Bad News” and heavy, creeping success “No Surrender”, Initiation proves not even halfway through that the band’s songwriting ability and the commanding performance prowess frontwoman Skye “Sever” Sweetnam, guitarist Matt “MD13” Drake, bassist Oscar Anesetti and drummer Matt “Trozzi” blend a recipe for greatness. The album continues winding through a mastery of heavy-meets-pop execution before ending with the full-throttle, sugar n’ salt packed album closer “This Dance Is Doomed” (while various editions cap off with sultry, confident “Awakened”).
By the end of Initiation, listeners will wonder just what exactly SUMO CYCO can’t do, proving them as a band on the rise, and that unconventionality always stands out from the pack.
Initiation tracklisting:*
1) Love You Wrong
2) Bystander
3) Vertigo
4) Bad News
5) No Surrender
6) M.I.A.
7) Cyclone
8) Run with the Giants
9) Overdrive
10) Power & Control
11) This Dance Is Doomed
12) Awakened (not available on standard digital version)
Outside of the story, the lyrics relate to the polarization of the world we live in now. We all have a longing to belong, but what makes one feel accepted or ostracized from a group? To be INITIATED, would you be willing to try to understand another point of view? I have always written lyrics about internal struggle, the war within oneself. Throughout the album, we bounce back and forth between struggle and overcoming. It reflects the times, and there are moments that seem a bit dark.”
Pre-order Initiation HERE
SUMO CYCO is:
Skye “Sever” Sweetnam – vocals
Matt “MD13” Drake – lead guitar
Matt “Trozzi” – drums
Oscar Anesetti – bass
Share