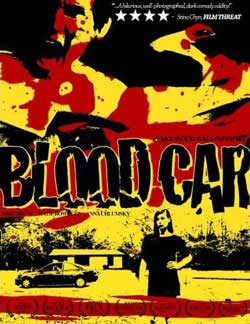 In the near future, gas is an astronomical $40.00 a gallon, and Archie Andrews (Mike Brune) has definitely had enough. Archie, a nerdy schoolteacher and vegan with a thing for wheatgrass, is determined to find an alternative energy source for his car. While experimenting, Archie cuts himself, and discovers that all his car needs is blood. Human blood.

The only one in town who can afford to drive, Archie attracts the attention of sex-crazed Denise (Katie Rowlett). As Archie fulfills Denises need for transportation, he satisfies his ever-expanding libido. Meanwhile, the sweet Wheatgrass Girl (Anna Chlumsky), who loves Archie for who he truly is, watches helplessly as Archie is devoured by lust. In order for Archie to continue to attract Denise with his car, he must continue to find a never-ending supply of blood. And unbeknownst to Archie, he is observed by government agents anxious to learn the secret of how his special engine worksagents who will make Archie face the ultimate decision.

Blood Car is one of those films that grows on you instantly. It’s got all a film needs. Charm, absurdity, some scifi, comedy, a likable cast of characters and originality. Usually in the case of these independents you come to expect less on the cinematic front, but Blood Car is directed with a careful eye and knack for framing. In short. the film even though of the horror genre…. is really geared towards the comedy end. The sum of its parts is quickly summarized.

It’s the future and mankind has exhausted many of it’s resources for gasoline. This has caused the price of gas to inflate to over $40 a gallon which means the only ones driving are the rich or wealthy. Up to this point, an alternative hasn’t been implemented so to be seen driving a car is a big deal especially with the ladies. Archie (Mike Brune) a day school teacher has been working on a engine that uses wheat grass for fuel.

His local stop includes a rather oddly placed wheat grass stand in the middle of a parking lot which is directly across from a competing meat stand. The wheat grass stand which is run by the dynamically appealing Loraine (Anna Chlumsky) has a crush on Archie who visits it quite frequently. Archie though is a blank slate who either doesn’t see the attraction or just doesn’t care and is pursued by the competing meat stand girl Denise (Katie Rowlett)

This cause for attraction though is really fueled by her needing to be seen in a car and getting the privilege of driving. The relationship is shallow and meaningless while Loraine observes from a distance. Though its seems to be enough to keep Archie interested while he deals with his car issues.

Well Archie discovers by accident that the engine is responsive to blood. Which begins the premise for the coined “Blood Car”. The FBI has been watching Archie from hidden security mainly for his engine that could prove to be a world wide alternative. Though the down side is it has to be fueled with Blood which means dragging strangers, vagrants and opposers into his trunk. The trunk equipped with a rotating blade acts like an execution device which grinds the bones and fuels the car with the left overs. Though as brutal as that sounds it’s usually done under a comedic premise rather than a psycho with a death machine. Running out of gas means bodies have to be fed into it to drive the car….cool eh? Well it doesn’t take long for life to become difficult for a number of reasons. Mainly that a children’s day school teacher has become a killer in order to fuel his car.

In all, the characters were entertaining though Archie himself is pretty undynamic. Loraine the other hand has a sense of charisma that’s hard to explain but just sings to the screen. Even in this rather obscure film I predicted she would escalate into more quality roles. For lack of better words, she really makes the film and as highly likeable, neurotic and nervous played actor. Those who remember her as a youngen might remember those big teddy bear eyes from the film “My girl”. Though Anna is all grown up now and a beauty to behold.

The film directed by Alex Orr is essentially more or less a first time direction outing. What I found impressive was his knack for detail and comedic framing. This film easily falls into one of those…”what a cool little film that was” category. Since my first viewing, I’ve watched it several times and it never seems to get old. It plays out nicely with an almost instant cult like feel and proves it can hold up on its own. If it’s fun, odd and quirky you want then “Blood Car” is the right choice.