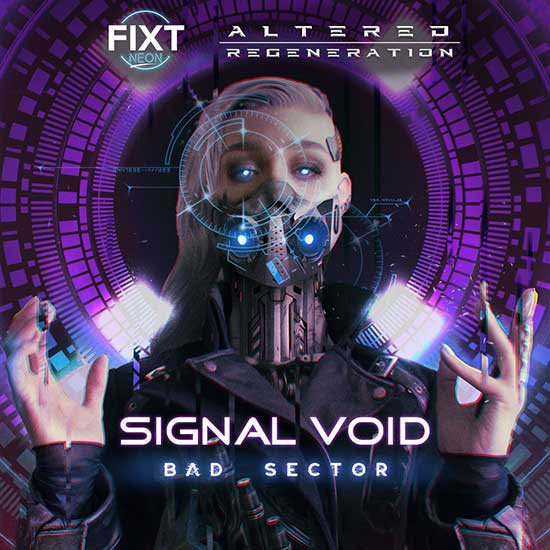 By embracing the soul of ‘80s synth music and film scores and translating those ideas into a forward-thinking approach to synthwave, Canadian artist Signal Void is redefining possibilities for cyberpunk music. The artist’s unparalleled creative style and lush production techniques bring the world of his music to life, creating a compelling vision of the retro-future where daily life and cyberspace are intertwined.

The vision of this world is expressed through Signal Void’s shadowy cinematic pieces, which often lean on heavy rhythm sections and beautiful, cascading melodies. The balance of light and dark in the music reflects the artist’s conceptual interest in the liminal space between the real world and the Net, a cyber-reality that has become corrupted by the mysterious Signal Void.

Signal Void released his first singles in 2018, and after finding a highly receptive audience to the music, connected with independent synthwave record label FiXT Neon for a multi-album deal. The label repackaged and re-released Signal Void’s early singles into a complete album, This Liminal Reality, at the close of 2019. In 2020, Signal Void released a series of Signals, the first “Altered” appearing on the FiXT Neon: Altered Anthology, followed by “Limbo” *(feat. Casey Desmond), “Turncoat” with DEADLIFE, “Pull Me Like Gravity” (feat. King Protea), “Stasis”, and “Road To Nowhere” all building up to his next full-length album in 2021.

By taking a visionary stance toward synthwave and its related genres, FiXT Neon has cultivated a roster of ambitious and innovative artists who are redefining the next generation of retro synth music. Although the label embraces a diverse selection of styles, from rock-flavored tracks to atmospheric cyberpunk and sunny popwave, its artists all have one thing in common: they all make great music. FiXT Neon provides an outlet for unique, personal creations that will resonate with synthwave fans of all types.

Just as the central FiXT label has redefined electronic rock for more than a decade, FiXT Neon provides a launching pad for the most talented and forward-thinking synthwave artists of the new era. Starting with a core group of big-name creators including Scandroid, PYLOT, The Bad Dreamers, LeBrock, Mega Drive, Essenger, and others, the label has quickly made an impact on the synthwave world and has become the key destination for top-tier releases from artists on the cutting edge of the genre.