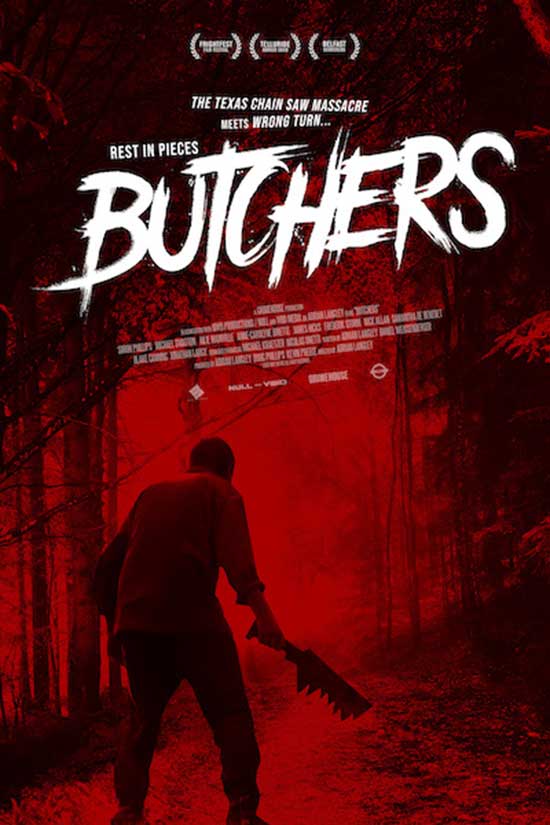 Four youths, stranded in the middle of nowhere, are being watched by a family of sadistic butchers

28th January, London UK: Sharp Teeth Films is thrilled to release their latest horror, Butchers. Directed by Adrian Langley, the Canadian independent horror will be released in the UK across all major digital platforms from 22nd February and DVD on 8th March to coincide with National Butchers Week!
After their car breaks down, four youths find themselves stranded in the middle of nowhere. Little do they know they are being watched. They soon fall captive to a family of sadistic butchers who keep their ‘fresh meat’ tied up in a wooden outhouse.
With hints of WRONG TURN, the four friends have little time to escape before it’s their turn to meet the chopping block.

Sharp Films’ director Joey Leung was delighted to share the news of the UK release. He says, “At Sharp Teeth Films, we love supporting independent directors. Adrian Langley is one to watch, having co-written and directed this refresh on a story that horror fans will be very familiar with.

We are also proud to be releasing this in the UK, with a strong British and Irish cast starring in the film. This will definitely broaden the appeal over here, especially with Simon Phillips from the White Collar Hooligan franchise playing a menacing Canadian cannibal!”

Coinciding with National Butchers Week, Butchers will be available on DVD from 8th March (& Digital Download from 22nd Feburary)