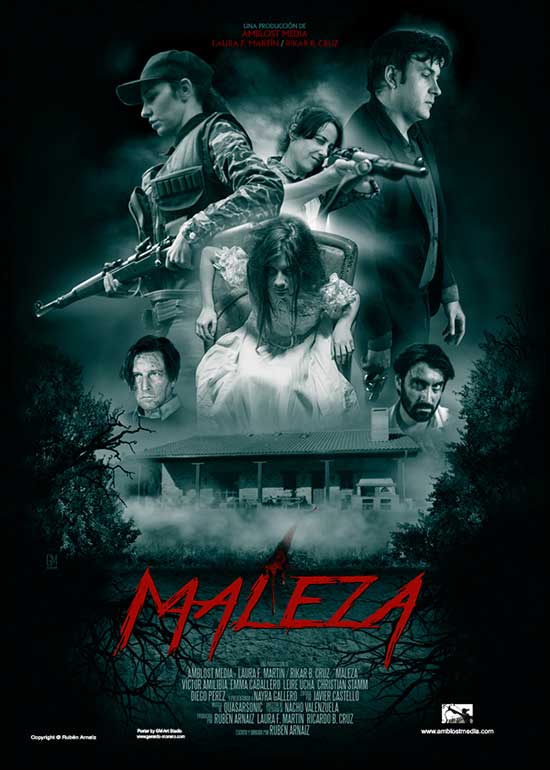 Víctor Amilibia (The Night of the Virgin and TV Series Allí Abajo and Acacias 38), Emma Caballero (Cervantes: la búsqueda, Molinos de Viento), Leire Ucha (La Línea invisible, Patria) and Christian Stamm (Malnazidos, Westworld) are the protagonists of “BAD WEED (MALEZA)”, written and directed by Rubén Arnaiz. It is a thriller (or social terror) about the dark side of the human being, in which three characters are pushed to the limit in a lush forest away from civilization.

The movie was filmed in Spain, entirely in the Basque Country (Gatika, Bilbao, Barakaldo and Gorliz) at high summer temperatures, to give that “harsh environment, to make the survival of the characters more difficult, if possible,” says the director. A whole film from “Rural Spain” (like Deep South from USA)” and that could also be part of the “Fantaterror”, as well as a tribute to the B series and Hammer Films movies.
Produced by Rubén Arnaiz, with Laura Franco Martín and Ricardo Benito Cruz.

It’s an Amblost Media production, with support of Inbisa, Imval and Tele 7. The film begins its sale now but will be able to be seen on digital platforms in early 2021.

SYNOPSIS:
Carlos wakes up in the middle of a forest bound and gagged without knowing what he is doing there or why. He soon discovers that he is the prey of a sociopath who will not stop until he is done with. However, Carlos manages to hope for the appearance of another woman, who lives in the forest and who welcomes him in her secluded and luxurious home to face her predator together. But as time passes in the house, Carlos discovers that nothing is what it seems and what seems is not what it is. Finally, Carlos will be involved in a spiral of terror and violence in which he must pay for his sins if he wants to survive.