Funding: Jungle Captive #1: a sci-fi story that examines the fragility of the human psyche 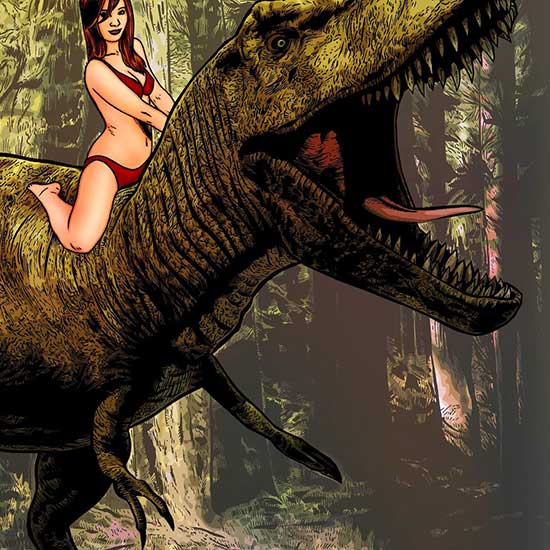 Launching this month on Kickstarter is the incredible new title Jungle Captive, the latest creative vision from the twisted mind of writer/artist Gary Parkin.

“When Lauren wakes up in a jungle with no idea of how she got there, she has to figure out a number of things, including whether or not she can outrun a dinosaur!”

When the coronavirus lockdown allowed him the time to put together his first full-length comic book, Gary Parkin launched Underglow Comics’ debut title Vampocalypse and it was a smash-hit. Jungle Captive is the latest project from the artist, with a number of exciting new projects planned for 2021 and beyond. He initially had some interest from a few publishers for Vampocalypse, but when the coronavirus led to a number of publishers cutting back on titles and some shutting down for the summer, he decided that self-publishing was the most viable option.

PLANS FOR 2021:
With a background in advertising and producing commissioned artwork, Gary Parkin’s career has been long and varied, but he’s never been as excited as when he’s drawing new original comics. 2021 will see the 3-issue Jungle Captive series published, alongside the conclusion of the Vampocalypse mini-series. An unusual superhero series will follow.

“I just love writing and drawing,” Parkin says. Coloring these projects is new for me because I usually work in black and white, but it’s exciting to be learning new skills.”

September’s Vampocalypse #1 had an initial print run of 300 copies, which sold out in under a month and has since seen a number of reprints, and the positive feedback for the company’s fledgling series has been unanimous. Parkin has his own take on the vampire genre, and he’s not afraid to bend a few of the long-existing rules. “I don’t think you have to stick to everything that’s gone before with vampires,” he says. “I like that it’s a fluid genre where you can add and remove some of the mythology and it doesn’t detract from the genre as a whole; it just adds to the story you’re telling.”

Jungle Captive #1 marks another genre that Parkin is happy to subvert to his own agenda. “At first glance, it looks like a T&A book, but it’s not that at all. It started off from a very simple idea: Girl wakes up in a jungle, doesn’t know where she is, then over time we start to learn the sinister reasons behind how she got there. I think of it more as a sci-fi story that examines the fragility of the human psyche than a typical Jungle Girl type of thing. Especially when you see the ending in issue three and how it’s going to tie in to something bigger.”

The Jungle Captive Kickstarter campaign was 100% funded in less than 24 hours and is picking up pace.

Rest assured, Gary Parkin has a bright future ahead of him in comics. Whether it’s as a writer or an artist, or indeed as both, this is one creator who is as excitable as he is passionate, and he has a lot of stories to tell. Please follow the link below and check out the Jungle Captive #1 Kickstarter Campaign: