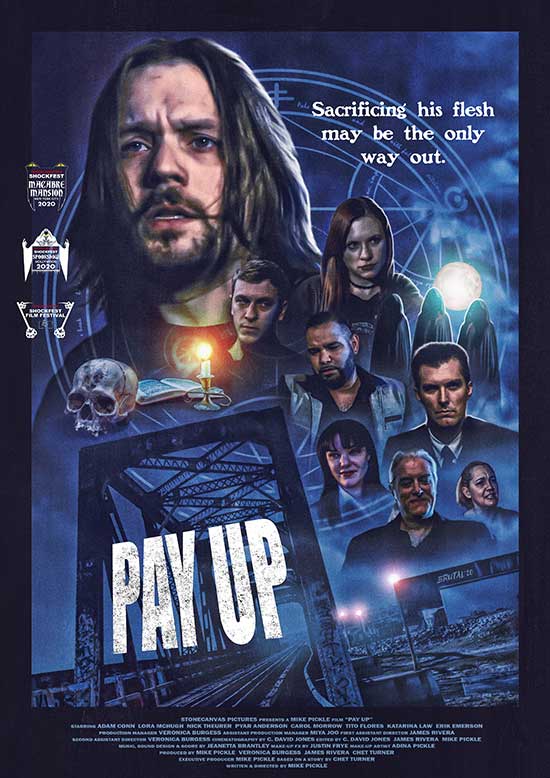 PAY UP, the 1st feature film for writer/director Mike Pickle, is having its WORLD PREMIERE at the SHOCKFEST FILM FESTIVAL this Friday and will be available to watch online along with many other top-notch indie horror films. Special guests of this year’s festival include ROB ZOMBIE, ZAK BAGANS of Ghost Adventures, ELVIRA Mistress of the Dark, Malcom McDowell, and more. After live portal events throughout the year in New York, Las Vegas, and Salem; the popular genre festival was forced to go virtual when new lockdown orders went into effect in Southern California where the main event is usually held.

Watch the WORLD PREMIERE this Friday, December 11th at the Shockfest Film Festival.

Hot off the success of his horror variety series (Pickle’s) HORROR SHOW on the American Horrors Roku channel in 2019 (where he helped grow the channel’s viewership to over 4 million); writer/director/producer/podcaster Mike Pickle took an opportunity to write and direct PAY UP based on a short story outline by Chet Turner. It was filmed in 5 ½ days on a budget of just $4,000.

Mike’s series also spawned a weekly podcast where he discusses his adventures in filmmaking and his love for the genre on his show “Ghostman & Rivera’s HORROR SHOW Podcast” with fellow Producer James Rivera (Spotify, Apple Podcasts, SoundCloud, and YouTube). Besides horror discussion, they interview artists and filmmakers in the genre like Sid Haig, David Howard Thornton, Adam Marcus, David Gregory, Jenn Wexler, Billy Pon, and more.

PAY UP stars Adam Conn, Lora McHugh, Nick Theurer, Carol Morrow, Pyar Anderson, and Tito Flores. Synopsis: JUSTIN, an awkward young loner with a dark past, meets the beautiful and charismatic ZOEY and falls in love for the first time. His best friend JOHN warns him about falling too soon, but that’s the least of his problems. Justin is caught between witty but ruthless drug dealer DELGADO and a dangerous CULT led by DAN and his sinister surgeon / co-leader VERONICA who urge him to repay his debt by submitting to a gory and invasive procedure.
Trading soft flesh for hard cash may be his only way out.

Director Statement:
I was approached to write and direct PAY UP by Chet Turner. He had a seed of a story and was looking for a writer/director/producer who could expand on it and make it their own. I had just recently decided to leave my freelance writing job and concentrate on my film career full time. This project came along around the same time I was approached to take a horror variety series I developed to the American Horrors Roku channel. I wasn’t sure I could do both, but this was the opportunity I had been working so hard for and I could not pass it up. The budget for PAY UP was only $4,000 and it was meant to be a short film. The way I expanded on the story opened up the possibility of making the film feature length and an already difficult challenge became seemingly insurmountable. We had already assembled a small, but strong team and I knew it was a team that was strong enough to tackle this project on such a tiny budget, so I moved forward. My fellow producers and I pooled our resources and shot the film in only 5 ½ days.

The story had elements of crime, horror, and exploitation, but I saw the possibilities to surround these elements with drama, suspense, and an emotional core that made you care about the characters before the more graphic elements came into play. I wanted to make a horror film with graphic and disturbing scenes that were surrounded by a world that felt tangible and made the viewer feel something before (and after) these disturbing moments occurred. Instead of making a horror film that was all about the graphic gore; I wanted to make a film that was all about the drama and the characters and the graphic gore enters the story as a biproduct of that.

I was inspired by the works of Martin Scorsese, Quentin Tarantino, Stanley Kubrick, and David Lynch (among others). I draw my horror influences from such directors as James Wan, John Carpenter, Wes Craven, and most recently S. Craig Zahler, Ari Aster, Robert Eggers, Issa Lopez, and Joe Begos. I want to make horror films that excite, inspire, and even titillate. I want viewers to feel something before I scare the pants off them or disturb them. The directors I mentioned above have done that for me. I can only hope to bring a fraction of the joy to horror fans (and movie fans in general) that these directors and others have brought to me.

I must admit that I gave the cast and crew of Pay Up an enormous challenge and they came through better than I could have ever imagined. We were faced with up to 21 pages of dialogue a day, stunts, practical special FX, multiple locations, and a shortage of equipment and everyone came together in a truly collaborative effort to help make a film that I am extremely proud of.

Working on Pay Up has given me valuable experience and introduced me to actors and crew members that I am extremely excited to bring to my future projects. After 12 years of creating short films, web series, TV shows, and immersing myself in everything horror; I have finally made my first feature length film. Now, I’m more ready than I have ever been to tackle the many film projects I have on the horizon. Including a feature film trilogy I have been developing while gaining the experience needed to make it a reality.