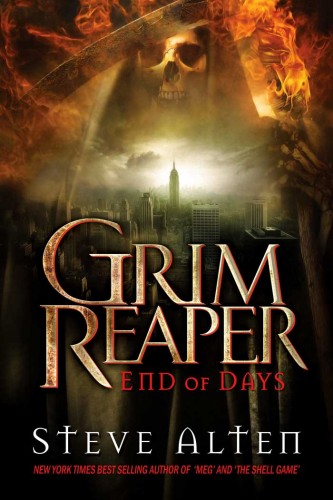 Four time New York Times Best selling author Steve Alten pens a new series titled “GRIM REAPER: END OF DAYS” (VARIANCE, October 2010) inspired by Dante’s “Divine Comedy”, one of the most revered works in literature. Divided into three distinct parts (Hell, Purgatory, and Heaven) the poem describes Dante’s journey through Hell, depicted as nine circles of suffering. Author Steve Alten takes us on a classic hero’s journey of good versus evil, transformation and redemption. The
modern day story set in Manhattan, New York, draws frightening parallels between the lack of morality that corrupted Europe preceding the Black Death (France, 1347) and the present day greed, deception, and cruelty that has mired our own society in economic collapse, two endless wars and our own self-destruction. The monumental task of weaving these concepts into a modern day story that meticulously parallels “Inferno” took author Steve Alten two full years to complete.

The planned trilogy begins with “GRIM REAPER: END OF DAYS” in which microbiologist Mary Klipot develops a bio-defense weapon for the Defense Department called “Scythe,” a modern-day version of the Black Plague which “God” commands her to release in Manhattan.

In a nearby VA hospital, Iraqi war veteran Patrick “Shep” Shepherd is recovering from an explosion that took his arm and the memories of his estranged wife and daughter, whom he has not seen in eleven years since the war began. Selected by unscrupulous politicians looking to use him as the poster boy for the country’s war efforts, Shepherd is immediately fast tracked with a private room, a prosthetic arm, and desperately needed psychological guidance by Virgil Shechinah, an elder
man whose stabbing analysis of Shep’s woes strike deep into his tortured soul. Meanwhile two floors down, a plague-ridden Mary Klipot gives birth to her “Christ child,” and in her delirium instructs Shep’s physician where to find the Scythe antidote.

When Shep overhears a telephone conversation by the Secretary of
Defense talking about the virus that has hit the streets of Manhattan,
he breaks free with the antidote, escaping armed troops, piloting a
Medi-vac chopper in an attempt to deliver the cure to his wife and
daughter. But Manhattan has been isolated by the military and Shep’s
chopper is shot down over Inwood Hill’s forest. Like Dante, our hero
awakens in a dark, strange wood, aided by his new

psychiatrist, Virgil. On his harrowing journey through the
plague-ridden streets of New York City, Shep must descend into his own
Nine Circles of Hell in order to reunite with his family, cleanse his
soul, and save humanity from the Angel of Death – the Grim Reaper
stalking him throughout Manhattan – the military intent on
“sterilizing” the Big Apple at dawn.

“Grim Reaper” is a dark tale filled with factual accounts of how greed,
corruption, and violence are staining our existence. Throughout the
novel runs a stream of true spirituality and hope, as Shep meets many
individuals who are selfless and good. Excerpts from the recently
discovered unpublished memoir of French surgeon Guy de Chauliac during
the Great Plague of 1347 are interspersed throughout the book and
present a frightening first-hand look at Bubonic Plague and the horrors
the Pentagon intends to unleash upon its “enemies” from its bio-warfare
lab in Fort Detrick, Maryland.