“Blood Fare” (bloodfare.warriorentertainment.com) is a Civil War ghost story with a modern twist, by J.A. Steel and Co-Producer Christian K. Koch.  It is the tale of Corporal Henry Trout (S. Edward Meek – “Wild Stallion”), who in 1861 fought valiantly in a forgotten skirmish after the first battle of Bull Run.  150 years later, he will come face to face with his descendants as the battle for blood continues on a haunted battlefield.  Tyler and her brother Chad (Adrian West), Henry’s fifth generation grandchildren, will challenge the very legend of Charon the Ferryman, as the lines between the living and the dead become blurred.

Gil Gerard, internationally recognized for his lead role as Captain William ‘Buck’ Rogers in the science fiction movie and television series “Buck Rogers in the 25th Century”, plays the character of Professor Meade, mentor to the protagonist Tyler, in “Blood Fare”.  Gerard was recently seen in the Syfy original movie “Ghost Town”, and will star with his castmate Erin Gray, in the upcoming television movie “Buck Rogers Begins”. 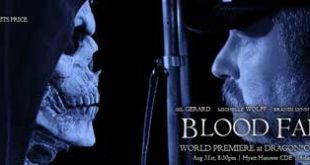