Home | News | Cult horror movie “Be My Cat: A Film for Anne” released on DVD and YouTube

Adrian Țofei has released his acclaimed found footage horror movie Be My Cat: A Film for Anne on DVD in two versions: one featuring the new poster by distributor Terror Films and one featuring the original poster by Adrian Țofei. Both are now available worldwide on Amazon.com and have identical content which includes 12 minutes of never-before-seen extra footage, closed captions and improved image and sound (compared to a 2017 limited release). Signed versions are available as well on Adrian’s official site, and later this year a special limited release by cult distributor TetroVideo will also be available. 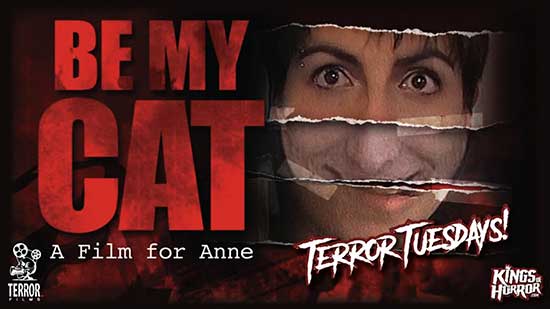 The movie is also set to premiere in a free livestream on the biggest horror YouTube channel, Kings of Horror, where Adrian Țofei and possibly other cast and crew members will be watching it together with everyone else and interacting with fans live in the chat. The livestream is scheduled for October 27th, 6PM Pacific Time, and has the option to set a reminder for everyone interested.

Be My Cat: A Film for Anne has been described as a cult film by fans and film professionals and saw a constant rise in popularity since its initial festival premiere at Fantasporto in 2015, mainly by word of mouth from enthusiastic fans and critics in the absence of a marketing budget. Adrian Țofei, who came from a background in method acting and theatre, partially improvised the movie in his hometown in Romania on a $10,000 budget as director, producer, writer, lead actor, editor, cinematographer and most other jobs usually performed by a film crew, he never used a camera before in his life, had no crew present during shootings other than him and the actresses, partially lived in character, met the actresses for the first time in character with the camera on, and kept only first takes in the final cut. Be My Cat went on to win numerous awards and critical acclaim, including Best Actor for Adrian at Nashville Film Festival and Best Film at A Night of Horror Film Festival in Sydney, being called “a new intelligent found footage film you need to see” by Blumhouse, “terrifying” by Austin Chronicle and “potentially revolutionary and dangerous” by Dread Central.

Adrian Țofei is currently working on a trilogy which includes Be My Cat: A Film for Anne, We Put the World to Sleep (in post-production) and Dr. Frankenstein (in development). His filmmaking method consists of working for months on an alternative psychological reality for the actors including himself, partially living in character, so that when they start improvising, he mainly needs to record the unfolding events and to make sure the improvisation goes in the right direction. There is no script, only plot points. Adrian shoots tens of hours of footage guerrilla style, and then he watches the footage like a documentary filmmaker would and creates the details of the story in post-production during the editing process. This method of filmmaking can lead to very creative and realistic results in terms of both acting and storytelling, but it’s almost impossible to work in the system this way, which is why Adrian opened a Patreon page where fans can support his creative efforts.
Share