NIGHT RANGER ENTER RECORDING STUDIO
NEW ALBUM PLANNED FOR RELEASE IN 2021
FOLLOW UP TO 2017’s “DON’T LET UP”
NIGHT RANGER have initiated the writing and recording of their next, yet untitled, studio album, which they plan to release via Frontiers Music Srl in 2021. The new album will follow 2017’s “Don’t Let Up”. While fans wait for the new album, they can enjoy this collection of videos from the band’s most recent releases via YouTube HERE: bit.ly/2HpuydS 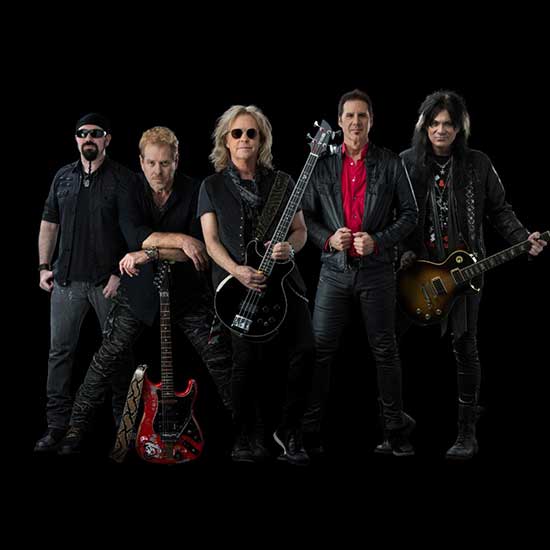 Songwriting started with the three original members Jack Blades (lead vocals/bass), Kelly Keagy (lead vocals/drums), and Brad Gillis (lead & rhythm guitars) meeting and putting their initial ideas together. The recording has now started with Eric Levy (keyboards) and Keri Kelli (lead & rhythm guitars) joining the process and the band will record through the rest of the year. The plan, subject to change, is to deliver the record to Frontiers in the first few months of 2021, with a release in the summer currently planned. The hope is that the album release will coincide with the band’s return to the stage, conditions permitting.
Night Ranger is proof positive that powerful, hooky songs performed by accomplished musicians is the perfect formula for continued success and their next album will further confirm that! “What this world needs now is to come together through music and Night Ranger is on it! We are excited to create a new studio album with our great partners at Frontiers Music. Our biggest problem is that we have so many songs, we’re trying to figure out which ones to leave off! Rock and Roll baby,” says the band.
For a crew that’s been rocking for almost four decades, their new album will continue their fine tradition of creating kick-ass American hard rock.
With more than 17 million albums sold worldwide, over 3500 live performances, and a radio audience that exceeds 1 billion, Night Ranger has both epitomized and transcended the arena rock sound and style. The band has earned widespread acclaim that includes multi-platinum and gold albums, while leaving their indelible mark on the music charts with a string of best-selling albums (Dawn Patrol, Midnight Madness, 7 Wishes, Big Life, and Man In Motion). Their popularity is fueled by an impressive string of instantly recognizable hit singles and signature album tracks, including legendary songs such as “Sister Christian”, “Don’t Tell Me You Love Me”, “When You Close Your Eyes”, the anthemic “(You Can Still) Rock In America”, along with “Sentimental Street”, “Goodbye”, “Sing Me Away”, and “Four In The Morning”.
Over the years, the band’s music has made notable contributions to and been featured in many different areas of media and popular culture. The band was one of the first big “video” bands on MTV, with over ten number one hit videos. Night Ranger songs can be heard in TV shows like, The Unbreakable Kimmy Schmidt, American Dad, Glee, Grey’s Anatomy, and Parks & Recreation. The band have also had music featured in video games such as Rock Band, Guitar Hero, and Grand Theft Auto, plus hit Broadway musical Rock of Ages, the Oscar-Nominated film Boogie Nights, and other feature films such as Friday the 13th, Teachers, Sixteen Candles, and The Secret of My Success. Night Ranger has also been featured in JBL’s “Hear The Truth” brand campaign, plus advertising campaigns from Dr. Pepper to Old Navy.
Night Ranger is Jack Blades (bass, vocals), Kelly Keagy (drums, vocals), Brad Gilli
Share