Home | Brand New and Collectible Back to the Future material in BACK TO THE FUTURE: THE ULTIMATE VISUAL HISTORY

Brand New and Collectible Back to the Future material in BACK TO THE FUTURE: THE ULTIMATE VISUAL HISTORY 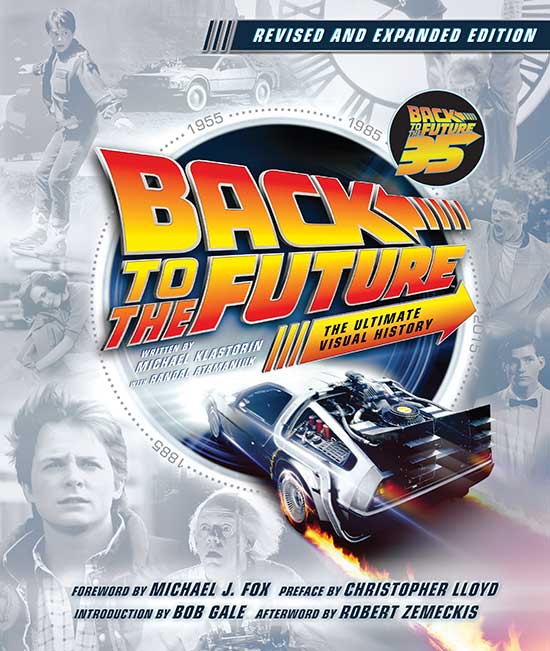 I’m pleased to get in touch about BACK TO THE FUTURE: THE ULTIMATE VISUAL HISTORY – REVISED AND EXPANDED EDITION (Insight Editions/Harper Design; 11/3), which we are publishing to celebrate the 35th Anniversary of the original Back to the Future. Written by Michael Klastorin, Back to the Future II and III’s production publicist, and featuring a foreword by Michael J. Fox and a preface by Christopher Lloyd, this new version contains brand new materials and removable collectable items!

Celebrate the film’s 35th anniversary with this visually stunning look at the creation of one of the most beloved movie trilogies of all time. Few films have made an impact on popular culture like the Back to the Future trilogy. This revised and expanded edition with officially licensed content goes behind the scenes to tell the complete story of the making of these hugely popular movies and how the adventures of Marty McFly and Doc Brown became an international phenomenon. Back to the Future: The Ultimate Visual History Revised and Expanded Edition is a stunning journey into the creation of this beloved time-traveling saga and features hundreds of never-before-seen images from all three movies, along with rare concept art, storyboards, and other visual treasures.

The book also features exclusive interviews with key cast and crew members—including Michael J. Fox, Christopher Lloyd, Lea Thompson, Robert Zemeckis, Bob Gale, Steven Spielberg, Frank Marshall, Kathleen Kennedy, and more—and tells the complete story of the production of the movies, from the initial concept to the staging of iconic scenes such as the “Enchantment Under the Sea” dance and the hoverboard sequence. The book also delves into the wider Back to the Future universe, exploring the animated television show and Back to the Future: The Ride.

This revised and expanded edition takes the story even further, covering everything from the events of 2015’s Back to the Future Day to a look at IDW’s series of comics, Tell Tale Games video game, a detailed look into the creation of Back to the Future: The Musical. The book features new interviews with co-creator/writer/producer Bob Gale, legendary composer Alan Silvestri, Grammy award-winning songwriter Glen Ballard, Tony award-winning director John Rando, and the show’s stars Olly Dobson (Marty McFly) and Roger Bart (Doc Brown), among many others. The show opened to rave reviews in February 2020, but was interrupted by the pandemic. Back to the Future: The Musical is scheduled to reopen in London’s West End in May 2021.

The book’s removable items include:

Can’t wait to discuss this definitive collected history that Back to the Future die-hards have been waiting for.