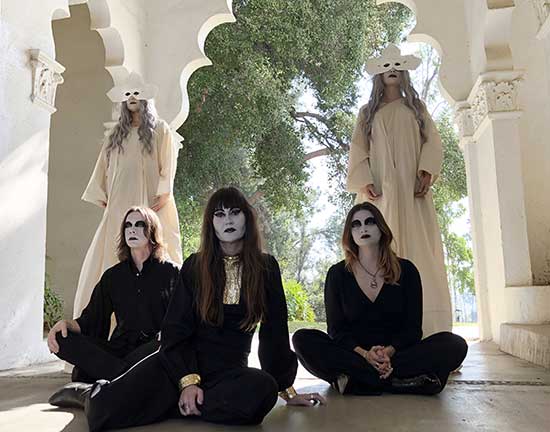 If seeing is believing, hearing is deceiving in the skillful hands of Secret Stare. At once channeling the glorious heavy metal riffage of yore – shifting gears between Sabbath and Maiden with a flick of the wrist in the overcrowded sonic traffic of the day – matched by the lush filmic synths from your favorite Italian horror score, along with the primitive percussive pulse of the next as-of-yet unnamed death cult – back from the dead, in a not-so-distant future. All of that to say, the sum of Secret Stare’s parts is really something else!

Formed by Erin Emslie (Hunx and his Punx, The Time Fly’s) and Will Rockwell-Scott (Mooney Suzuki, Wolfmother). Secret Stare are a fully realized vision of otherworldly dimensions. Emslie’s background as a visual artist, working in pattern making and costume design, informs the surreal and haunting sounds the group embodies on stage. At a glance Secret Stare would be at home as the Black Lodge houseband, or crashing a Kubrick costume party, but stop and stare, and listen further, and the untold realms Secret Stare inhabit will come into kaleidoscopic focus.

Like Abba if they were hell bent for leather, or Bowie if his Space Oddity was spawned by Satan, Secret Stare meld glam rock hooks and pomp with anthemic gloom and doom swagger. So listen up – you won’t wanna look away, but it’s okay – Secret Stare are on display, and a visceral experience to behold.