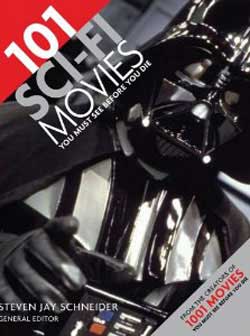 It’s probably safe to say that the sci fi movies of generations are perhaps the most iconic of our film history sporting images of aliens, spaceships, alternate worlds and tales of fantastical proportion. As another entry into the featured films books, “101 Sci fi movies” surely captures the essence of the sci fi revolution. 1920’s carried forward to current, there are quite alot of iconic images that pop out of the pages from early child hood thru adulthood. Those memorable images of Robbie the robot, Darth Vader, the Invisible Man, giant ants, Godzilla and even that crazy George Melies image of a rocket ship planted firmly in the eye of the moon.

Yes, these are just a sampling of the rich science fiction entries that grace these pages. A confident team of writers were selected to give short overview analytics and factual reporting on 101 films from decades past. Entries range from “The Thing, “The Time Machine”, “Westworld”, “Logan’s Run” to “Clockwork Orange” and of course several others. 101 Sci-fi Movies catalogs quite a variety of titles. A few fall into the cross genres of horror such as “alien” “Scanners” and even the cult cyber punk Asian masterpiece “Tetsuo”. A smaller sampling of anime titles, and some more important foreign submissions also make appearances. Each defines the film and a bit of further information of interest.

“Fantastic Voyage” takes the helm at an early “inner space” scenario opening the pathway to other more sophisticated titles. “Planet of the Apes” launches an entire franchise of sacrifice films wile “Soylent Green” makes a more political futuristic statement without the usual bells and whistles of an apocalyptic representation.”Logan’s Run” captures viewers attentions but fizzles out with a 2nd half of the film. “Star Wars” sets new records as one of the most important sci-fi films ever created. Though its George Lucas’ passion that drives the franchise even as far as constant re tweaking up to this day. The film took a rather unusual approach to starting its tale in mid journey than from the beginning. “VideoDrome” crossed boundaries that finds itself equally mentioned in cult book, and horror books as this sci-fi book. A rather unusual beast, it spawned a rather specific director approach that can only be called “Cronenbergian. Further entries encapsulate our fear of aliens, fear of alien monsters, comedic parallels and further styles of our world being overtaken, destroyed or invaded. Sci-fi usually refers to outer space based films, but in this case we’ll find that the genre has many ways to a means that plant it within this category. A nice little book full of great information and retrospect. 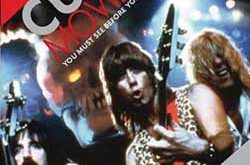 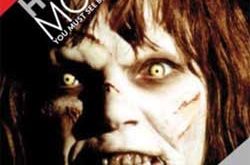