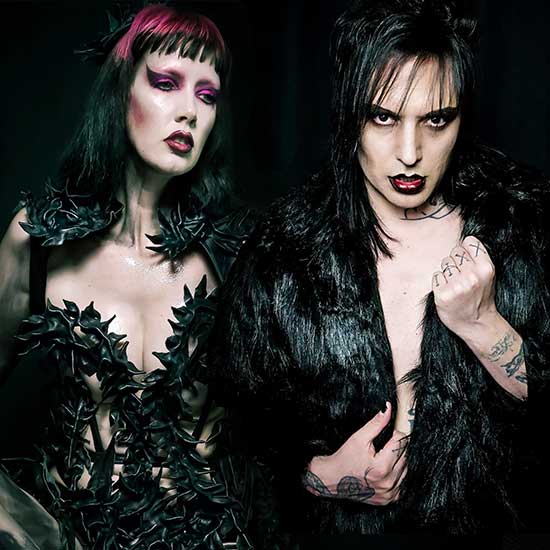 White Wolf is a fairytale where the hunter becomes the hunted. Shot in the haunting English woods, White Wolf begins with a innocent portrayal of vocalist Caitlin Stokes, but it slowly takes a deceptive turn. The song deals with how power can corrupt and turn what was light, to dark. Caitlin provides more personal details on what inspired the song..

This video is the fairytale version of my journey as a woman in the world, from once being preyed upon transforming into the hunter not only did I become stronger from my experiences maybe I was always the White Wolf deep down

White Wolf is off Corlyx’s new album Together Apart, which is out now on label Negative Gain. The music video for White Wolf premiered on Post-Punk.com and can be seen by clicking the image below.

Corlyx was formed in Los Angles in 2015, with the meeting of singer songwriter Caitlin Stokes and Producer/Guitarist Brandon Ashley, also the front man for dark rock sensation “The Dark”. The two began writing music together that was inspired by their love of 90’s Industrial Rock/Grunge and modern Electronica.

The duo released their first EP “One Of Us” the following year of Corlyx’s inception, then moved to Berlin Germany to work on their first full length album “Music 2F2”.

Berlin brought so much inspiration to their music and songwriting, the grotesque landscape of the inner city allowed the Duo to fully express their darker inclination. The Album was released February 2017 with stunning reviews:

Corlyx relocates to the UK, to work on their second studio Album “In2 The Skin” (released August 16th 2019), developing their live show, touring in both countries, Germany and England, playing world renown festivals such as Autumn Moon in Hameln, perfecting a live show that showcases the intensity of the music they put out.

Corlyx signs with USA label Negative Gain to release their 3rd studio album Together Apart taking the band in new direction musically by adding elements of Darkwave and Post Punk to their songwriting.