Home | Asylum Press announces the release of Beyond Lovecraft: An Anthology of fiction inspired by H.P.Lovecraft and the Cthulhu Mythos by writer/artist Frank Forte 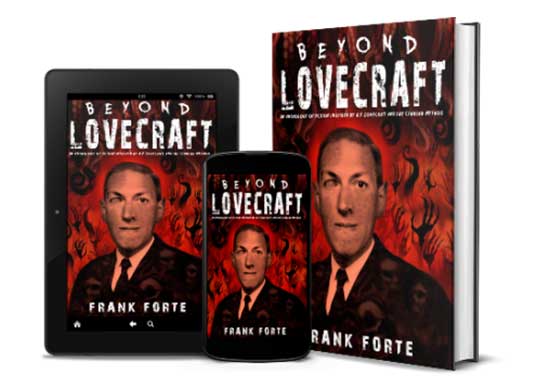 Los Angeles, CA – Asylum Press announces the release of Beyond Lovecraft: An Anthology of fiction inspired by H.P.Lovecraft and the Cthulhu Mythos by writer/artist Frank Forte.
Beyond Lovecraft: An Anthology of fiction inspired by H.P.Lovecraft and the Cthulhu Mythos is written by Frank Forte (Lovecraft Country, Conjuring 3, Insidious: The Last Key, Heavy Metal Magazine). This collection of terrifying tales takes us to the edge of the worlds of H.P. Lovecraft and beyond. Lovecraft has inspired writers, artists, video game creators, board game creators, comic book artists and feature film directors.
This collection features:
“The Experiment” tells the tale of a Cold War military medical examiner who receives the task of doing an autopsy on a victim of a biogenetic weapon.  “Asphinxiation” is the horrid story of an archaeologist who travels to Egypt and discovers something terrifying inside the mysterious Sphinx.
“The House At The End of the Street” recalls the ghastly account of a man trying desperately to overcome his childhood fears.
“Dead Thing” is a grim reminder to stay away from carcasses you may find in the deep dark woods.
“The Connection” takes us inside the mind of a mad doctor who thinks he has just created man’s next evolutionary phase.
“Incident at the Haxford Inn” recounts a gruesome tale of a curious reporter who dares to investigate a haunted hotel.
Any many more horrifying stories can be found in its pages!
Available NOW: www.amazon.com/dp/B08F1K8GFM
H.P. Lovecraft’s trademark fantastical creatures and supernatural thrills, as well as many horrific and cautionary science-fiction themes, have influenced some of today’s important writers and filmmakers, including Stephen King, Alan Moore, F. Paul Wilson, Guillermo del Toro, and Neil Gaiman.
Included in this volume are stories inspired by “The Case of Charles Dexter Ward,” “The Call of Cthulhu,” “The Dream-Quest of Unknown Kadath,” “At the Mountains of Madness,” “The Shadow Over Innsmouth,” “The Color Out of Space,” “The Dunwich Horror,” “Re-Animator”, “From Beyond” and many more hair-raising tales.
Beyond Lovecraft is a website that chronicles all things Lovecraft.
www.beyondlovecraft.com/
Share