Writer/Director Matthew John Lawrence took time to talk with Horrornews.net. He talks about his new film Uncle Peckerhead, the music, the special effects and much more.

HNN- I watched Uncle Peckerhead and it was great! I do have to ask is Peck a zombie or a ghoul? It’s so cool how the transformation happens. He changes and it’s a different concept.

MJL- I never considered him to be a zombie, some people call him a demon. I originally wrote in the script, a ton of backstory and lore. After a draft, my wife who co-produced the movie was like, I think it’s a lot more interesting to not explain everything. I always considered him to be a ghoul of some type or a monster. Originally the concept was supposed to be that I wanted to pitch an idea to Adult Swim and my idea was to do a play on a sitcom. It was a group of young punk kids living in a house and they have this hillbilly tweeker that was like three times their age living with them. It was like a punk rock Full House with a redneck Mr. Belvedere. That kind of morphed. I always loved horror and the last few films I made were horror films. So, when that idea wasn’t gaining any steam, I just decided to blow up this concept into something bigger and add the horror elements that were in the movie. Thank you so much for watching, that means a lot that you liked it. 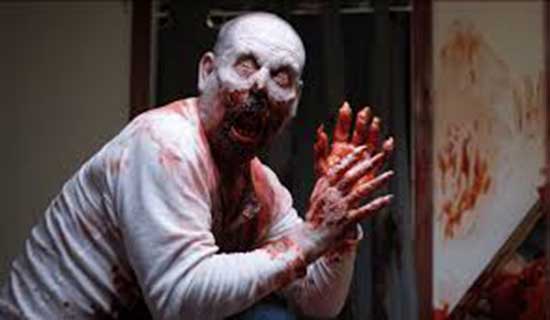 How did you get your special effects people ready for this? There are some insanely wild, awesome scenes, a lot of bodily fluids involved. A lot of blood. David looks amazing when he changes into the zombie/ghoul/demon. It is fun and watching this as a horror fan, I found this fascinating. I’ve been watching horror movies since I’m a kid and some of the scenes make you go, OH MAN! Holy crap! But, in a good way. The effects are awesome.

MJL- That is all Jared Balog who is our special effects guru. I’m like you, a kid at heart. When I first started discovering films at our local video store, the first aisle that caught my eye was the horror movie section. It’s really there and I knew when I made this movie with my last short film, Larry Gone Demon (2015) I knew that I wanted to do practical special effects and make-up solely. I didn’t want to rely on computer generated stuff. I feel that even when it’s done at its best, there are so few films that stand the test of time. Most of the films that use practical special effects and make-up and actually put a lot of care into it, I mean you can watch films from the late seventies, early eighties and they still hold up. They still feel tangible and it feels real and visceral. I knew I wanted to do that. We met Jared and he’s a consummate professional. He was able to work with us. That’s all to his credit. I didn’t have to alter the script too much.

I felt like this cast kind of knew each other forever. I loved Chet as Judy, Ruby is so cool and Jeff as Max. David was awesome as Peck. It was like watching your own friends just talking and having fun, going out and stuff. What was it like working with everyone and directing this cast?

MJL- It means a lot to hear that and the initial reactions, people picked up on that. We only got to play a couple festivals. I’ve known Jeff who plays Max for at least over a decade and he’s one of my really good friends. He’s an amazing musician and he’s one of the funniest, charismatic people you could meet in real life. I knew I wanted to have him and Chet, Ruby and David were all through casting sessions. What was amazing is, you know within a couple of days of our shoot, they did become this tight knit group. The van we used is Jeff’s van. Jeff would drive them to and from set. They would eat together, travel together and within forty-eight hours of knowing each other they had become this tight knit group, what you saw on-camera existed off-camera. As a director, you could want nothing more. It tickled me, it warmed my heart and that’s how you get great performances. I don’t have to work as hard on getting these performances and this dynamic between them. They feel so comfortable around each other. We got so lucky.

I loved it too that there was humor and light moments. I loved the scene where they meet Greg’s character Nick and the “he looks like a baby deer” comment. This movie is fun and it feels relatable. Did you want to add in the comic relief?

MJL- I always kind of gravitated towards comedy, I think beyond that, some of the things that your speaking about and thank you so much for saying that. I really like films that have heart. I think you can do it in the horror genre but I don’t see it a ton in horror films. I wanted to make a film that could be gory but have those real visceral, gritty moments. I don’t know if gritty is the right word but hardcore moments. But, ultimately, it’s about this group of friends being driven by this one person. There’s some kind of heart and moments of levity.

Exactly. I do have to ask because of the ending which I don’t want to spoil the ending.  But will there be a sequel?

MJL- It would be a dream. I have a treatment written for an Uncle Peckerhead sequel. The sequel idea is a bigger idea and it would take a bigger budget. I have another film completely written and ready to go. It’s a continuation of the DUH story, it doesn’t have Peckerhead necessarily but it’s a continuation of their tale as a struggling band. But with Peckerhead, I would love to revisit those characters. I have an idea on how that story can be extended.

I loved that too that the band’s name is DUH. The music in the movie is good too. It’s just a fun movie.  It would be interesting to find out more about the band.

MJL- Thank you. I’m telling you; we’re just starting to talk to people and hear from people who watched it. The fact that you connected to it and it’s clear with your questions, you took to a lot of the things we were trying to do when we made the film. It’s so great to hear that from people.

MJL- I want you to watch and enjoy. People were having watch parties and sending both the festival and us pictures of them watching. What’s unfortunate during these covid times is, I really made this movie thinking that we’d have a nice festival run and I think it’s the type of film where I would love to watch it with people in the theater. Part of the inspiration in making it, is that I had gone to a film festival and there wasn’t that fun audience experience that you want when you see certain films. I remember seeing Shaun of the Dead for the first time. I would encourage them to watch it with friends and tell other people. It is a microbudget production that is relying on, if people like it, talk to other people about it.

I agree with you when you say it has “heart.” Just listening to the conversations between the friends and I’ve been watching horror movies since I’m a kid. It’s a movie that stands out. It’s fun, bloody, has a great story. But, there are little things that stand out. David did such a good job as Peck and he turns into this ravenous monster and then he’s real light hearted and calm and funny. It’s just a gnarly, fun movie to watch. I do wish I could have seen this in the theater with my friends.

MJL- Yeah, that would be the dream. I’m so glad that your lovin’ on David or Peck. He joined our merry band of misfits. We do hang out. He’s one of the best people you could ever meet. He is one of the best actors I’ve ever worked with. But he’s also one of the kindest human beings. It’s so odd watching the movie when he has those menacing or gnarly moments because the Peckerhead monster couldn’t be any more opposite from David Littleton that we know and love.

Do you think you will ever talk more about the music? Maybe on the Blu-Ray or DVD? I wondered if they were all playing too because they were rocking in the movie.

MJL- The music element came about because I had grown up playing in bands and I grew up in the punk scene. Jeff who plays Max has been in some pretty decent sized bands, he’s toured all over and internationally. Jeff was like, “hey listen, I can write the music. What do you need me to do?” He really wrote a seven song EP. He wrote and recorded an original soundtrack for the movie. It was great having a collaborator and a good friend like Jeff. He was totally game for anything. I didn’t give him much direction except the music should be joyful, nihilistic and punk. He’s always played guitar. When you see them play, they are playing. It’s amazing, Chet’s singing voice is actually the voice, she’s in bands. Chet and Ruby were playing. They were so game to learn and knock out the songs. Jeff was so impressed. They learned how to play the instruments.

The songs are great too. It made me happy. That’s awesome. It was an honor to talk to you. Uncle Peckerhead was such a fun movie. Thank you so much Matt.

MJL- The honor is all mine. Thank you for the kind words. Thank you. 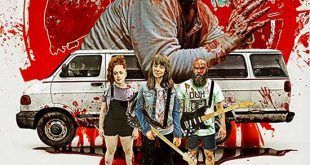