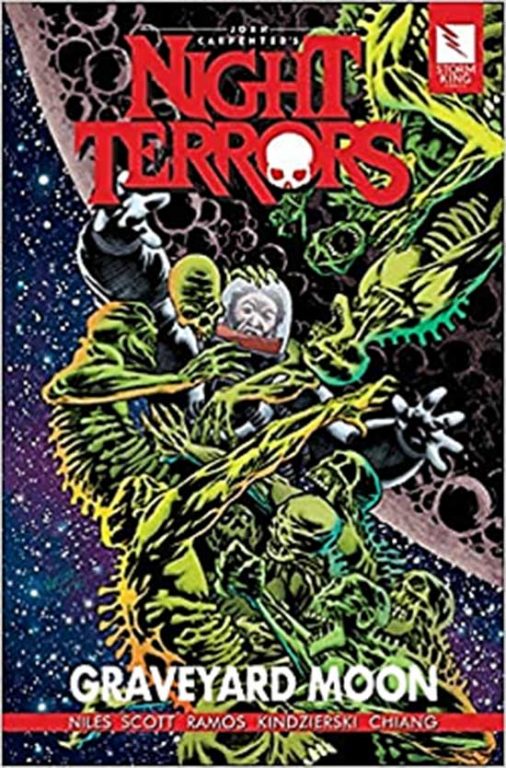 Ghastly Multi-award-winning  publisher Storm King Comics is launching a new line of graphic novels that are exclusively self-contained stories. The first release in the line is John Carpenter’s Night Terrors: Graveyard Moon (ISBN: 978-1733282130) which hits comic stores September 9th and book trade September 22nd. This full color 72 page trade follows the crew of a cargo ship that transports the dead for burial on a designated Graveyard Moon who find themselves overwhelmed by unspeakable horror… surrounded by the ghosts of the dead they carry. Signed copies are available at www.stormkingcomics.com.

Storm King Comics CEO Sandy King Carpenter explains “Sometimes an idea is so good you just have to figure out a way to make things happen. Night Terrors is the line that lets us develop stories that just don’t fit into our other lines. As soon as the phrase ‘space graveyard’ came up I was hooked. When you see a Night Terrors release you will know that in those pages it is a story so unique that there was no other choice but to ensure it made its way to fans.”

In the not so far future, Earth no longer has space for graveyards. Callisto, a rocky moon of Jupiter, has become designated as the graveyard planet, but only the wealthy can afford a proper burial there. Cooper and his longtime crew prepare to transport a load of the dead, having flown this route many times over. But their routine trip to the graveyard moon is disrupted by deception and greed… and they find themselves under siege by the ghosts of the dead they carry.