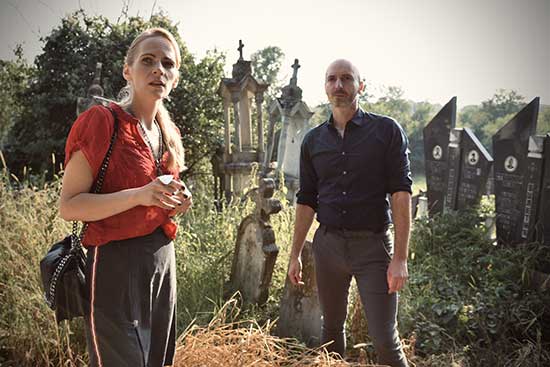 After witnessing a crime in London and looking for a place to hide for a while, Arnaut (played by Branko Tomovic) is offered a job by charming yet ruthless local Vesna (played by Gorica Regodic) to look after a cemetery in a small remote village in Serbia. He soon starts to have nightmarish visions and is frequently visited by the mysterious older woman Baba Draga (played by Eva Ras) who guides Arnaut into the darkness. Only the village priest (played by Joakim Tasic) seems to be trying to keep him safe from the sinister intentions of the villagers.
“Vampir” is being filmed in English language on locations in central Serbia until end of September and is a UK-Serbian-German co-production, produced by Milos Z. Vuckovic, Jean-Louis Alexandre and Dina Vickermann. Award-winning composer Mark Ashworth (“ABCs of Death”, “Entity”) will create an original score for this with cinematography by Heath McWaters. Rounding out the cast are Judith Georgi (“Jojo Rabbit”) and Nemanja Bajic (“Neki bolji ljudi”).
“Our film is inspired by the real vampire cases that occurred in Serbia in the early 1700s. Those were the origin of vampires. Though “Vampir” is set in modern times it’s based on those myths, superstitions and folk elements. I wanted to show a more mysterious side of Serbia” says writer/director Branko Tomovic.
This is Tomovic’s feature debut as a writer/director, his previous short films (“Red”, “The Smell of Petrol”) have won numerous awards and nominations at major prestigious festivals, including qualifying festivals for BAFTA and the European Film Awards.
Share