A JOURNEY INTO THE DARKEST REALMS OF POP CULTURE

The annual HARD:LINE Film Festival in Regensburg is flying the face of the times and is presenting 29 films from the genres of horror, thriller and science fiction from September 23rd to the 27th. For five days a maximum of 50 guests can watch the films in the Ostentor cinema. In addition, the festival offers 100 virtual tickets for each film in the festival stream. The online film festival takes place from 24th to the 28th of September and can be visited throughout Germany via the festival website. 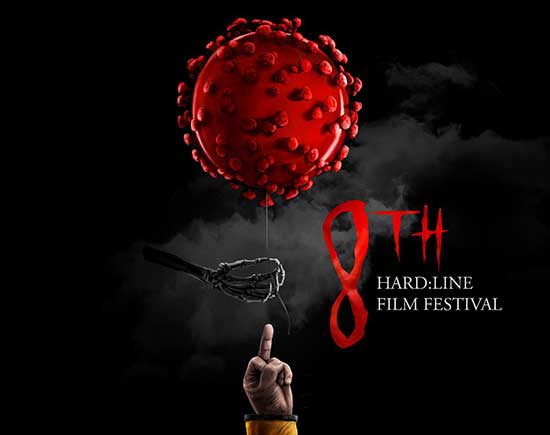 The festival will open with the European premiere of UNEARTH, an environmental horror film that can also be seen as a virus metaphor. Between Bodyhorror and BODYSNATCHERS, the directing couple Dorota Swies and John C. Lyons have created one of the genre highlights of the year against this background.

The world premiere of Chad Ferrin’s independent film THE DEEP ONES is rather nostalgic. With passion and inventiveness, he delivers a declaration of love to the filmmaking of days gone by. The retro charm is also apparent at the international premiere of AL MORIR LA MATINEE where a killer decimates the visitors of a movie theater with a wink. For the first time in Europe, the Vietnamese production KUMANTHONG will be shown. This film spins a story around the real cases of the first mass murderer in Vietnam, a woman fighting with all her might for her freedom. Two films from Canada will be shown overseas for the first time. FOR THE SAKE OF VICIOUS is a brutal and extremely rough representative of his guild. THE OAK ROOM is a completely different story, an adaptation of a stage play that lives primarily from its story and offers extraordinary entertainment. For the first time on a German screen, the Colombian folk-horror film LUZ: THE FLOWER OF EVIL will flicker. The American mystery horror thriller SATOR will also celebrate its German premiere in Regensburg.

SLEEP provides the proof that world-class genre cinema is also possible in Germany. On the other hand, The Danish-Swedish production KOKO-DI KOKO-DA feels like the Haneke version of GROUNDHOG DAY. The programme also includes the Sundance hit DINNER IN AMERICA. The official closing film of the festival is PSYCHO GOREMAN. All films will also be shown in the festival stream. Exceptions are PSYCHO GOREMAN and a surprise film. HARD:LINE shows these two films exclusively for festival pass holders and only in the cinema.

As the German member of the Méliès International Festivals Federation, HARD:LINE is once again proud to present the coveted Méliès D’Argent Award for the best European fantastic short film. The jury consists of Polly Allen, co-director of the Celluloid Screams Film Festival in Sheffield, Niels Owesen, buyer for Pandastorm Pictures and Roberto San Sebastian, director of NIGHT OF THE VIRGIN. Together they will decide the fate of ten nominated short films. Six more short films have been selected as international highlights. In two blocks, festival visitors and viewers at home will each see eight short films – mostly as German premieres.

As a festival one has the task of building a bridge between filmmakers and fans.
– Florian Scheuerer, Festival Director

Due to the pandemic, the festival organisers are unable to bring guests to Regensburg this year. Therefore, interviews were pre-produced for almost all feature films, which will be shown in the cinema as well as in the stream. But the supporting programme will also take place in a slimmed-down form. The Sublime DJ night and the live concert at the final evening are reserved for the small circle of season ticket holders. However, the festival is cooperating with the local online radio station GHOST TOWN RADIO to broadcast these events on the Internet as well.

This year’s festival is special in many ways. Despite all the adversities, we have outstanding films in the programme. We are sure to deliver a highlight for every taste. But borderline experiences are also important. Film is colourful and exciting and longs to be discovered! We hope that as many people as possible will dare to join us on a journey into the darkest realms of pop culture – they will not regret it!
– Florian Scheuerer, Festival Director