Join us LIVE for a
Gothic Horror Panel
in celebration of
Women Running from Houses
Castle of Horror Anthology Vol. 4

October 13 at 5:30pm Pacific/ 8:30pm Eastern Castle Bridge Media presents a Zoom panel on Gothic Horror on the occasion of the release of Castle of Horror Anthology Vol. 4: Women Running from Houses, a collection of Gothic-themed horror stories, in paperback and Kindle. 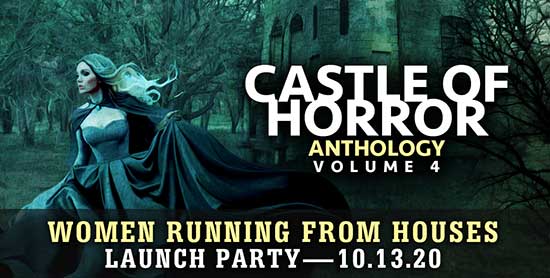 The theme is Gothic– the horror of Gothic romance. Throughout the mid-century, paperback Gothic romance books dominated the shelves, always featuring a woman running away from a house. (Go ahead, Google “women running from houses.”) Gothic romances tended to tell stories of women coming into conflict with old families, old houses and old traditions. So we’ve asked a bevy of best-selling writers to celebrate the movement with their own horrific takes on Gothic. Run from the house with us!