Home | EVIL may be Unleashed When 8ight After STREAMS INTO YOUR HOME.

EVIL may be Unleashed When 8ight After STREAMS INTO YOUR HOME. 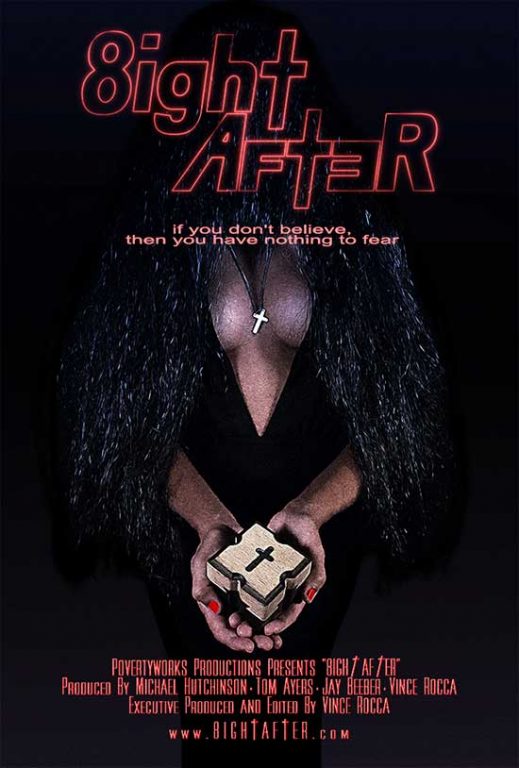 When Deanna Rocca discovered a Portate cross hidden in the wall of her Granada Hills home, she wasn’t prepared for the horror it would unleash. The angled (portate) cross was locked in a puzzle box and concealed inside the wall. Thinking the treasure was a fortunate find, she started wearing the cross, but it soon began to consume her. “Looking back, there were many signs that something was wrong,” remembers her husband, Vincent Rocca, “but it wasn’t until I saw a shadow sweep across the door on our security cameras that I really realized something was happening.” Vincent began monitoring those security cameras, and eventually compiled them into a movie.

Vincent is a Reality Television Editor, Deanna is a Zoo Vet Tech and together they make VLOG videos for their youtube channel. The couple are High School Sweethearts and have been together for over 30 years and married for 21. “She is my world, the most important thing to me, losing her terrifies me. in all our 30 years, I’ve never seen her act like that,” said Vincent.

After combing through thousands of hours of security camera footage and combining it with talking vlog footage Vincent believes he’s created the first ever Reality Movie. “It’s a documentary with the touches of a film, like sound design and score. I edited 8ight After just as I would have cut an episode of Hell’s kitchen, complete with jokes, but our villain is more frightening than Gordan Ramsey.” explained Vincent. “Reality Television is a stylized documentary. This is just that, except a movie, a Reality Movie.” 8ight After is unique in that it doesn’t use interviews to move the story along, but instead uses first person VLOG narration. It could also possibly be the first full length feature VLOG movie.

Since 8ight After grew organically out of VLOGS and surveillance footage, the cost of production was zero. The footage was just sitting waiting to be assembled. Vincent elaborated, “I literally did everything on “8ight After” the editing, color correction, sound mix and score. I took it on as a personal challenge. Yes, it does look a lot like Paranormal Activity. Chalk that up to a one man post production with a lack of creativity. Green night shot footage just doesn’t look good in green, or red, but blue seems to work. I mean, even Survivor uses blue, but when combined with security footage of two people sleeping, of course its going to have that Paranormal Activity vibe.”

At Midnight, October 15, “8ight After” will be available to own in high definition from select digital retailers. A book version compiled from Vincent’s journals is available now on Amazon.

SYNOPSIS
After discovering a cross hidden in the wall, a YouTuber gets terrorized by a demonic presence inhabiting her home at eight after one in the morning.