On October 2, 2020, Shout! Studios will unleash the highly anticipated epic action movie adventure THE RISING HAWK for watch-at-home on VOD and digital platforms in the U.S. and Canada. 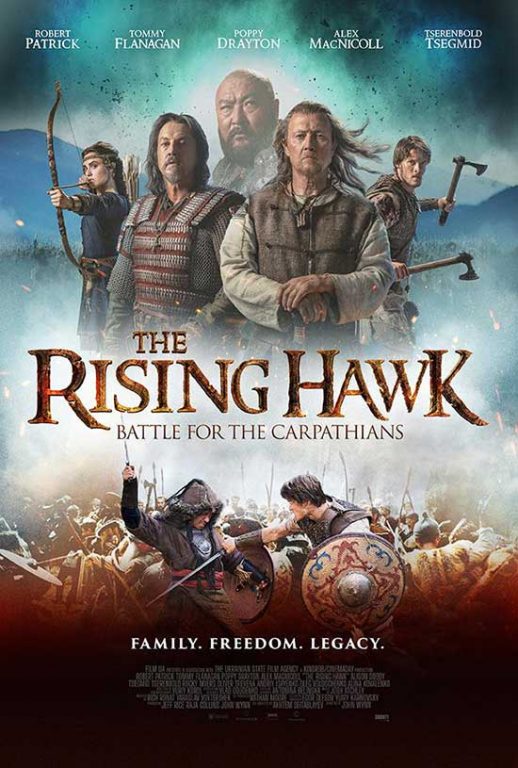 During the 13th Century, Zakhar Berkut (Robert Patrick) and his wife Rada (Alison Doody) lead a group of highlanders in the Carpathian Mountains. Unfortunately, their tranquil existence is soon threatened by Burunda Khan (Tsegmid Tserenbold), a powerful Mongolian general who leads his massive armies west in search of new lands to conquer.

Forced to protect their village, Zakhar and Rada send their sons, Ivan (Rocky Myers) and Maksim (Alex MacNicoll), to ask for help from Tugar Volk (Tommy Flanagan), a wealthy boyar overseeing the land. After his strong-willed daughter Myroslava (Poppy Drayton) and Maksim survive a dangerous encounter together, Tugar Volk pledges to defend the villagers against the Mongols. But when a mutual attraction sparks between Myroslava and Maksim, Tugar Volk forbids them from continuing their relationship. Meanwhile, Burunda Khan faces questions from his warriors about his motivation and military strategy for the impending invasion.

As war breaks out, both sides suffer devastating casualties. Redoubling his efforts, Burunda Khan unleashes the full fury of his forces. Faced with certain doom, Maksim and Myroslava must choose to flee or make the ultimate sacrifice to save their people.