A Dying Father Fights For His Family’s Future in Sci-Fi Drama LX 2048, Premiering 9/25

Quiver Distribution, in a partnership with Chimera Pictures and Outta the Bloc, has announced the virtual theatrical and North American digital debut of writer/director Guy Moshe’s LX 2048, a near-future dystopian drama about one father’s search for a way forward for his family before his time runs out and a clone takes his place. LX 2048 will be available to rent or own September 25th on Amazon, iTunes, Comcast, Spectrum, Dish, DirecTV, Vudu and more in the US and Canada. 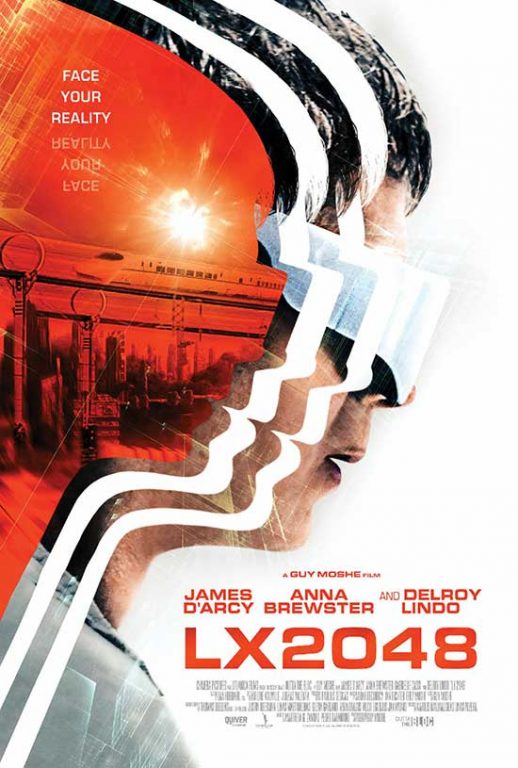 James D’Arcy (Dunkirk, “Broadchurch”, Marvel’s “Agent Carter”) headlines the cast as a man who has resisted humanity’s exodus to virtual reality. With his death fast approaching and a clone ready to step in as husband and father, Adam struggles to find a way out of his situation, to protect his wife (Anna Brewster, Star Wars: The Force Awakens, “Versailles”) and children. The cast is rounded out by frequent Spike Lee collaborator and Tony Award nominee Delroy Lindo (Malcolm X, Da 5 Bloods, “The Good Fight”) and BAFTA winner Gina McKee (“Our Friends in the North”, “The Borgias”, Phantom Thread).

It is 2048. Mankind has by now destroyed the ozone layer to such a degree that normal human beings cannot be out in daytime. People spend their waking hours at night and almost everything is done inside the virtual realm. From work to school to socializing, most people just stay home and conduct their affairs from their Virtual Reality designated spaces. Mental depression has become so prevalent that the entire population is required to take the state issued pill 001LithiumX.

In this new world order, Adam Bird is a rare breed. Adam insists on waking up during the day. He insists on leaving his house and going to work in a physical office. He has 3 kids in a time when most people barely breed, and he adamantly refuses to take 001LithiumX, fighting to stay human in a world that is rapidly transforming into the artificial.

But things change when Adam discovers his heart is mysteriously failing. With no possibility for an organ transplant, Adam is now scheduled to be replaced by a cloned upgrade – an improved version of himself that will be supplied to his estranged wife as part of the Premium 3 government insurance plan. Spiraling out of control, Adam starts living on borrowed time, seeking to find a solution before his replica will be sent to raise his kids and replace his existence across the board.