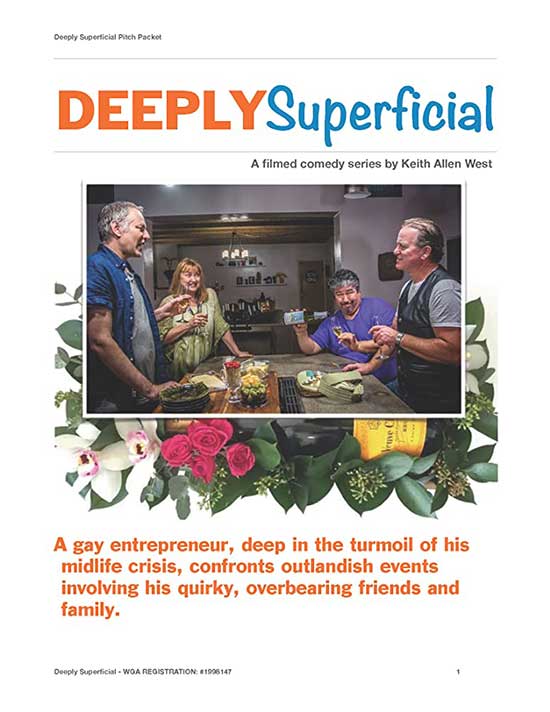 With throwback comedic timing mixed with a contemporary shooting style, the show presents an honest look at a middle-aged, gay, divorced man’s life.

“My goal is to write, produce, and cast more comedic series in New Mexico,” said West, “From the inception of “Deeply Superficial”, it was really important to me to hire a female director.”

An accomplished Actor and Director, Michelle Tomlinson has received rave reviews in several Feature Films. She is Directing two Documentaries, and a short film, “Redemption,” which will be released later this year.

“”Deeply Superficial” is an incredibly fun and refreshing show”, Tomlinson states. “The characters are well developed and the story is solid. It’s funny and clever and I am truly excited and honored that Keith has reached out to me to direct.”

For more information look on Facebook for Deeply Superficial and www.DeeplySuperficial.tv

Keith Allen West is a dynamic actor that portrays powerful, complex and authentic characters in feature films and tv shows. Through out his career, he has worked with actors from multiple Academy Award winning films. He has a lead role in the independent film Third Act. Born in Cincinnati, Ohio, he has been entertaining crowds and appearing on major media since attaining his college journalism degree. He works in TV, Film and Commercials throughout New Mexico, Los Angeles, CA and globally.

“Deeply Superficial” is a half-hour comedy with the quick witted humor of a 1990s sitcom, but with the artistic styling of a modern single-camera show. While quick paced, the show will also deal with relevant drama via hard-hitting current events. Taking cues from the hits Modern Family and Silicon Valley the series will be shot much more like a film, without a live audience.

Rooted in the present day, the show explores the realities and struggles Keith and his friends and family face in the search for love, acceptance and career being constantly contrasted with the unattainable ideal of happiness