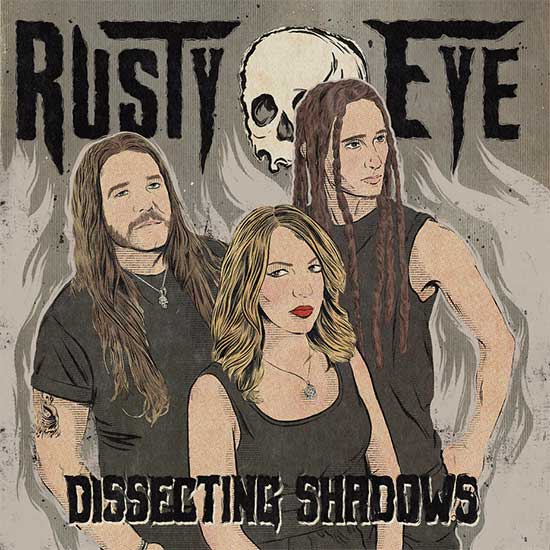 Marking their first new music since 2014 and sixth album overall, heavy metal trio RUSTY EYE have announced the October 23 release of their new full-length album DISSECTING SHADOWS on Epoché Records/Blood Blast Distribution. Their most ambitious recording thus far, DISSECTING SHADOWS encompasses their personal blend of prog, thrash, punk, blackened death, and synthwave, all squeezed through a keyhole of grindhouse grime that they define as “Rust’n’Roll.” The entire album celebrates exploitation cinema, Italian horror, and grindhouse, executed with topnotch musicianship, songwriting, and creative originality. The album’s fierce debut single, “This Is Permanent,” is out now across all digital platforms and was premiered alongside its music video yesterday (August 27) via Metal Injection.
“This is Permanent” disguises darkness in catchiness. Its lyrics exam the perils of addiction, without being preachy; it plays with the idea of being “under the influence” (whether that’sdrugs, the media, other people). The video was filmed at the infamous Jumbo’s Clown Room strip club in Hollywood, CA with director Alejandro Ordonez (Raubtier Productions). Watch it streaming below.

DISSECTING SHADOWS is available for pre-order on CD, Vinyl (Limited to 500 clear variants) and a special limited-edition branded boombox and cassette bundle at