Home | Behold one of the X-men’s Greatest Battles in Pepe Larraz’s Key Art for X of Swords!

Behold one of the X-men’s Greatest Battles in Pepe Larraz’s Key Art for X of Swords!

The dark history of Arakko will soon be revealed, and when it is, the very future of mutankind will be at stake. Now, witness the cataclysmic showdown between the sword bearers of Arakko and the ten mutants who will stand up to defend the new mutant nation of Krakoa in Pepe Larraz’s breathtaking key art for X OF SWORDS. This fateful clash and many others are what await readers in this crossover epic written by Jonathan Hickman, Tini Howard, and all the current writers of your favorite X-Men titles. The next chapter in Hickman’s bold reshaping of the X-Men that began in House of X, this story will stand alongside influential X-Men crossovers like The Mutant Massacre and Messiah CompleX. The victories will be legendary, the losses will be heartbreaking, and the revelations will send shockwaves throughout the Marvel Universe. This sprawling saga will have a lasting impact on the future of the X-Men, forever changing the fate of the franchise’s most prominent characters. 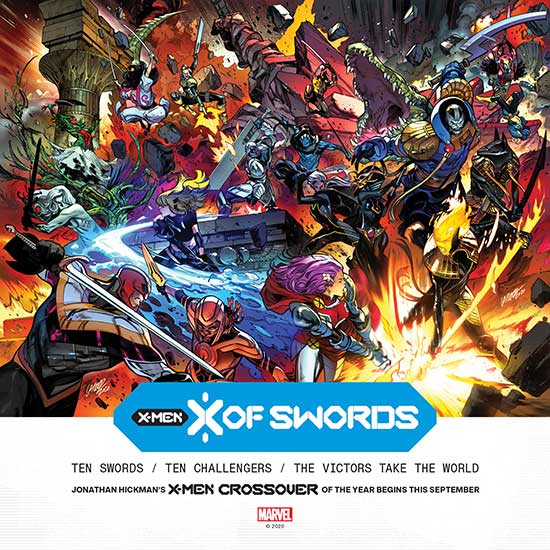 “I’m consistently thrilled to see X-Men characters with swords and goblets, alongside dragons and things,” Excalibur and X of Swords: Creation writer Tini Howard told SYFY Wire in a recent interview. “It’s really unexpected, but so fun. These are fantastic heroes and they do fantastic things. Yes, it is super rad to see the X-Men with swords. Thank you all for understanding that.”

Raise your swords for the next great mutant milestone when the crossover begins in X OF SWORDS: CREATION #1, on sale September 23rd!