Summer evenings are the perfect time for sharing scary stories around the campfire… but what to do if real fire isn’t an option? And what would a campfire be without s’mores? To celebrate today’s DVD release of Are You Afraid of the Dark?, we’re excited to share this cardboard campfire craft and s’mores recipe!

This s’mores recipe and campfire craft have been submitted for the approval of The Midnight Society. Storytelling around the campfire just got a lot more fun! ARE YOU AFRAID OF THE DARK? is available on DVD today! bit.ly/AYAOTDCampfire 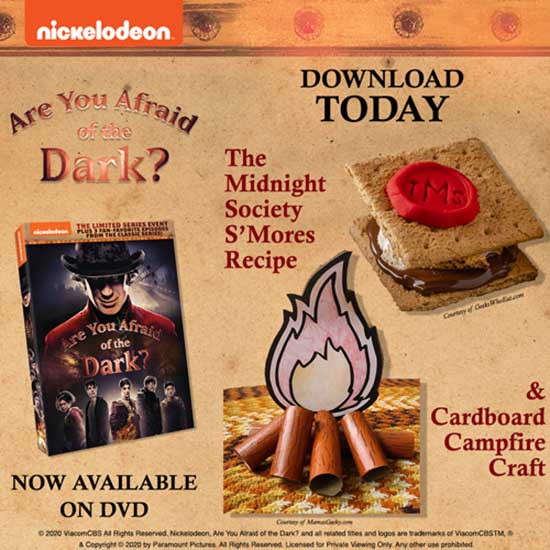 JOIN THE MIDNIGHT SOCIETY IN THE MUST-OWN,
LIMITED EVENT SERIES ARE YOU AFRAID OF THE DARK?,
BASED ON THE CHILLING & BELOVED ‘90’S ANTHOLOGY

2020–Re-imagined for a new generation, Nickelodeon’s all-new version of ‘90’s kids’ cult classic Are You Afraid of the Dark? arrives on DVD Tuesday, August 11, 2020 from Paramount Home Entertainment and Nickelodeon Home Entertainment. The three-part limited series follows members of an entirely new Midnight Society, who tell a terrifying tale of the Carnival of Doom and its evil ringmaster Mr. Top Hat, only to witness the shocking story come frightfully to life and prepare for an adventure beyond their wildest nightmares.

A must-own for fans of the classic series, as well as those new to the franchise, the Are You Afraid of the Dark? DVD also includes three fan-favorite episodes from the original series and will be available for the suggested retail price of $13.99.

Are You Afraid of the Dark? Episodes:

Special Features (US only):

Are You Afraid of the Dark? is produced by ACE Entertainment (To All The Boys I’ve Loved Before, The Perfect Date) with ACE founder Matt Kaplan and Spencer Berman serving as executive producers. The series is written by BenDavid Grabinski (Skiptrace, Happily) and directed by Dean Israelite (Power Rangers movie, Project Almanac), both of whom are also executive producers. Chris Foss is also an executive producer.

Nickelodeon’s Are You Afraid of the Dark?, a three-part reboot of the hit ‘90s series was 2019’s number-one co-viewed show across all TV and each of the three installments won their time slot, ranking as the number-one live-action series on basic cable with Kids 2-11, 6-11 and tweens 9-14.