Home | In the sinister vein of THE ENTITY and THE CONJURING comes PARANORMAL ATTRACTION!

In the sinister vein of THE ENTITY and THE CONJURING comes PARANORMAL ATTRACTION! 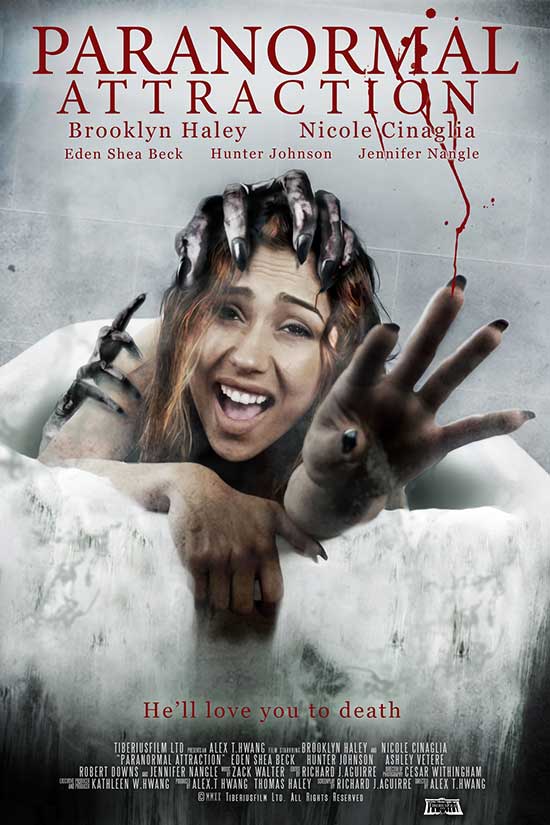 In the tradition of THE ENTITY and THE CONJURING comes the sexy horror ride PARANORMAL ATTRACTION!

The film was written by Richard J. Aguirre and directed by Alex T. Hwang, and produced by Kathleen W. Hwang, Pat Kusnadi, and Thomas Haley.

Paranormal Attraction tells the dark and sinister tale of a young woman, Sara Myer (Brooklyn Haley), who moves into an abandoned house with a tragic and mysterious past.  As Sarah begins to purge the house of the previous owner’s belongings, she begins to uncover its deadly secrets. Rookie police officer Evelyn Bennett (Nicole Cinaglia) helps her investigate the mysterious happenings and captures Sara’s heart. Will they learn the secrets of the house or will the house claim Sara’s soul?

“I have loved movies since I was a kid growing up in Korea. I remember my mom taking me to see American movies like Star Wars and Superman in theaters.  When my family moved to the United States, I found a group of friends who were as passionate about movies as I was. I made my first short film on Super 8 and 16mm camera when I was 16 with my brothers and friends, and it fueled my passion for film making even more.  Classic horror films like, Jaws, Psycho, The Exorcist and The Shinning, have driven me to make horror films.

My wife, Katie, encouraged me to pursue my dreams and make the films that I love. I’ve always admired directors like Alfred Hitchcock, John Carpenter, Sergio Leone, Stanley Kubrick, and Steven Spielberg.  They are masters at what they do, and they can manipulate an audience’s emotions and take them to another place for a couple of hours. I hope I have achieved that with Paranormal Attraction. Paranormal Attraction is the third feature film I have directed and produced. I had the vision for Paranormal Attraction for a while and was so happy that I had a great script to work with. The cast was able to embrace their roles and give life to the words written on the page. I am grateful to everyone who played a part in helping to complete this film. I hope to entertain and scare all horror film fans but I believe that even if you don’t like horror films you will certainly enjoy Paranormal Attraction.”

Paranormal Attraction is an official selection of the AOF (Action on Film) Film Festival and will be premiering at AOF Film Festival on Sept 5, 2020 @ 4PM in Las Vegas.