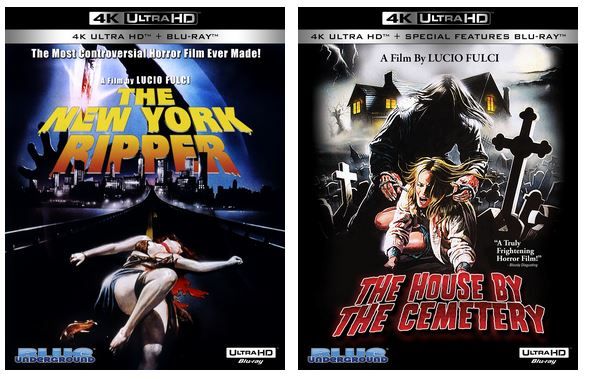 Blue Underground is proud to present critically acclaimed restorations of THE NEW YORK RIPPER and THE HOUSE BY THE CEMETERY in true 4K Ultra High Definition with Dolby Vision HDR and a new Dolby Atmos audio mix, bursting at the seams with hours of new and archival extras.

“We put a lot of time and work into restoring these films,” said William Lustig, President of Blue Underground. ” We’re thrilled that fans can now view them at home in true 4K Ultra HD, with Dolby Vision High Dynamic Range and new Dolby Atmos audio mixes.”
THE NEW YORK RIPPER

Someone Is Taking A Big Bite Out Of The Big Apple… On 4K Ultra HD Blu-ray!

A blade-wielding psychopath is on the loose, turning The Big Apple bright red with the blood of beautiful young women. As NYPD detective Fred Williams (Jack Hedley of FOR YOUR EYES ONLY) follows the trail of butchery from the decks of the Staten Island Ferry to the sex shows of Times Square, each brutal murder becomes a sadistic taunt. In the city that never sleeps, the hunt is on for the killer that can’t be stopped!

Co-written and directed by acclaimed horror maestro Lucio Fulci (ZOMBIE, CITY OF THE LIVING DEAD) and filmed on location in the mean streets of New York City, this is one of Fulci’s most savage and controversial thrillers. Now Blue Underground’s acclaimed restoration of THE NEW YORK RIPPER, scanned in 4K 16-bit from the original 35mm 2-perf camera negative, is presented with Dolby Vision HDR and a new Dolby Atmos audio mix, gushing with hours of Extras!
Disc 1 (4K UHD Blu-ray) Feature Film + Extras:
* Audio Commentary with Troy Howarth, Author of Splintered Visions: Lucio Fulci and His Films
* Theatrical Trailer