X OF SWORDS, the next great X-Men crossover, kicks off this September and rages on in October with Chapters 3-11. Over the last few days, the covers for the October chapters were unveiled, and fans got their first look at the X-Men’s newest foes in Pepe Larraz’s cover of X OF SWORDS: STASIS #1. This mysterious group of swordbearers come from the land of Arakko, and the X-Men will have to draw swords of their own to defend the new mutant nation of Krakoa. Arakko and its visitors are shrouded in mystery, and none more so than the group’s leader. While her identity remains classified, her story is sure to shock X-Men fans everywhere. 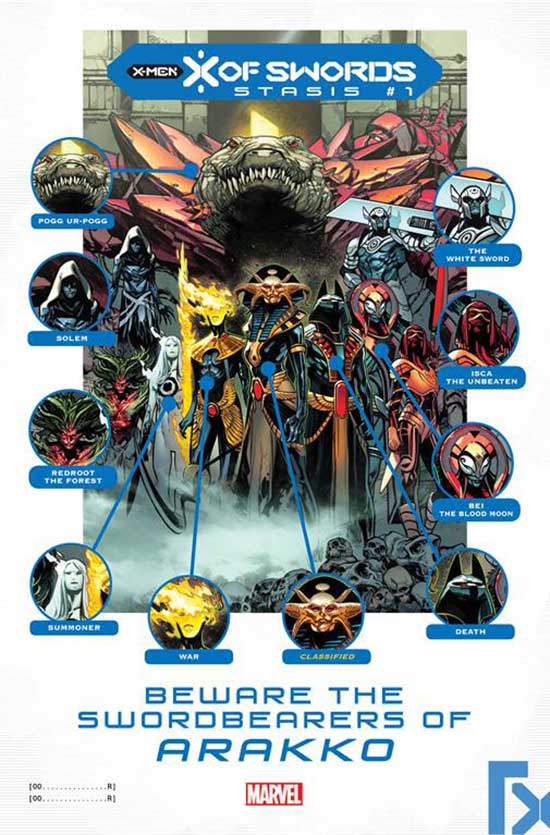 Spinning directly out of Jonathan Hickman’s X-MEN and Tini Howard’s EXCALIBUR, X OF SWORDS will be a massive mutant milestone that each X-Book will take part in. Every current X-Men writer— Jonathan Hickman, Tini Howard, Gerry Duggan, Benjamin Percy, Ed Brisson, Zeb Wells, Leah Williams, and Vita Ayala— have come together to craft a modern epic that will go down in X-Men history! Joined by incredible artists like Carmen Carnero, Pepe Larraz, R.B. Silva, Viktor Bogdanovic, Matteo Lolli, Mahmud Asrar, Phil Noto, and Rod Reis, the dramatic battles in store for the X-Men will be unforgettable.

See all of October’s covers by visiting marvel.com and prepare to meet these major new players in the X-Men mythos when X OF SWORDS begins in September!

Stealth. The power within. The burden of knowledge.

A secret flight. A long journey. A Thief and a Queen.

Desperation. Help from unexpected places. An advance into the unknown.

Diligence. Discipline. A sword of the self.

Art and Cover by PHIL NOTO

A hand held aloft. A mystery in the stars. An ace up the sleeve.

Opposition. Despair. The dark night of the soul.

Lessons. Longing. What has begun cannot be undone.

A ritual. A parliament. A game begins.