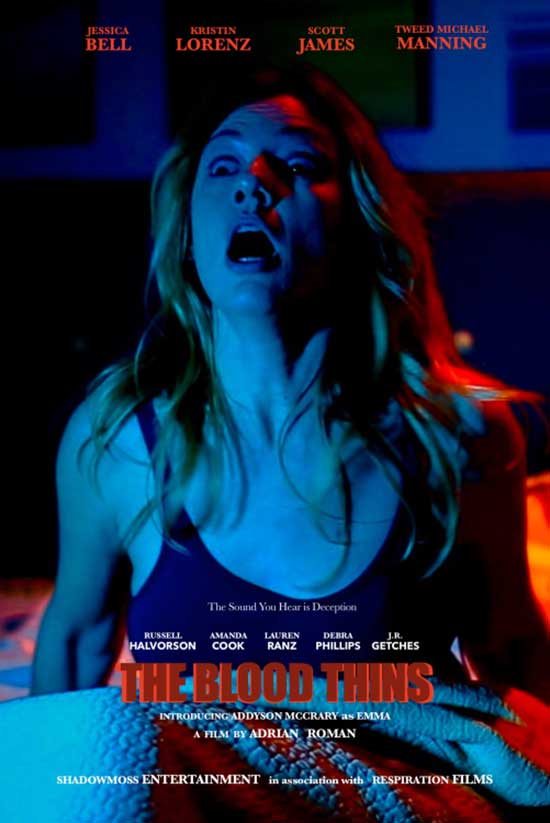 Much Anticipated Thriller/Horror/Mystery Film THE BLOOD THINS By Award-Winning Writer/Director Adrian Roman
The odd, unusual, disturbing story is released, or should I say, “unleashed,” to the general public!
Charleston, SC – Shadowmoss Entertainment in association with L.A. Grip Studios has released the much anticipated Thriller/Horror/Mystery film THE BLOOD THINS starring Jessica Bell as Polly Duggin and Kristin Lorenz as Selena Blackburn.
Polly Duggin, a young wife and mother, who abruptly loses her husband and young daughter by weird and unusual circumstances begins a quest to discover the true cause of the tragedy. The plot twists and turns as Polly confronts strange visions and disembodied voices. When she starts uncovering the truth, all hell breaks loose.
“I read the screenplay and immediately decided that I wanted to help get this film made. So many people are screaming for something different and fresh. This movie checks those boxes,” says Executive Producer, Scott James. “I can’t watch a predictable film, this movie keeps you guessing the whole time,” Film Critic, Georgia Collins.
The Movie is now made available through Vimeo on Demand and to rent and buy on Prime Video:
www.amazon.com/blood-thins-Jessica-bell/dp/B088T58LGQ
vimeo.com/ondemand/thebloodthins
Share