Home | Dracula! One Bloody Fang After Another – audiobook coming July 2020

Dracula! One Bloody Fang After Another – audiobook coming July 2020

“DRACULA! ONE BLOODY FANG AFTER ANOTHER”
WRITTEN AND PERFORMED BY JOHN HEWER
DIRECTED BY BRUCE KNIGHT
PRODUCED BY HAMBLEDON PRODUCTIONS 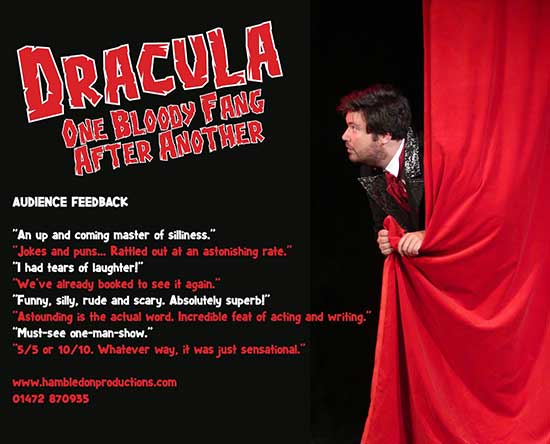 Over 100 years since Bram Stoker’s immortal, bloodcurdling novel was published, a new, affectionate lampooning of the gothic classic is now set to delight comedy and horror fans alike.

Riding on the success of recent smash-hits Just Like That! The Tommy Cooper Show and Steptoe and Son, this new comedy from Hambledon Productions reimagines Stoker’s 1897 masterpiece, with delicious punning and clever wordplay. The production premiered in 2019 to sell-out audiences and critical success. It returned in early 2020 and was set to tour nationwide in the autumn; however, in light of the coronavirus pandemic, the tour has been postponed until further notice.

Instead, with moderate tweaking to the script, the play has been adapted into an audiobook, and will be available to download and to purchase as a special edition CD release via the Hambledon Productions website next month, accompanied by new character illustrations, two mini-essays (‘Stoker’s Dracula’ and ‘Comedy Draculas: A Real Pain In The Neck’) and a selection of original production stills.

John Hewer, who wrote the script and performs an impeccable feat by bringing an impressive eighteen characters to life, is behind the production: “I grew up appreciating comedians and comedy actors from a bygone era, the likes of Tommy Cooper, Monty Python and Morecambe and Wise. Their work still has a huge following and still holds up very well in front of contemporary audiences. None of them, however, tackled Dracula to any great depth. I consider it a subject ripe for ribbing, indeed it has been sent up occasionally, with sometimes pleasing but, more often, less satisfying, even embarrassing results. Stoker’s novel is still terrifying, still gripping, whereas some adaptations on film, stage and television haven’t aged as well. Comedy and horror are much the same. Both thrive on elements of surprise; mistaken identity, chases and near-death-experiences. I’ve so enjoyed sending up the whole Victorian gothic genre, but have painstakingly (pun intended) stuck close to the original story and Stoker’s iconic characters.” 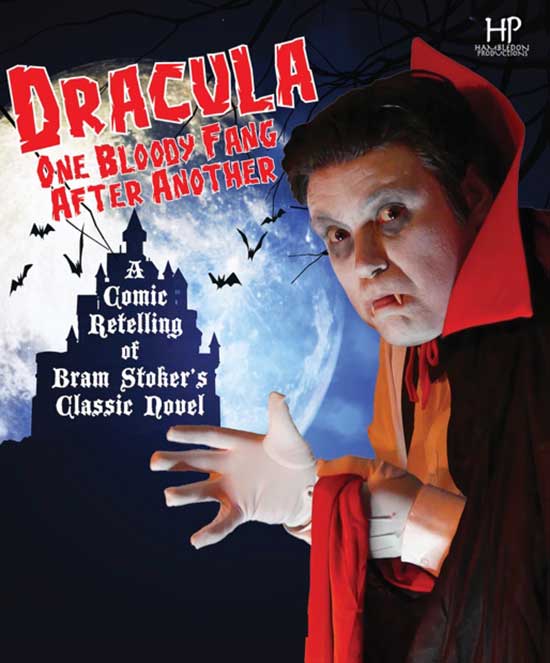 Discussing the leap from a traditional theatre production to an audiobook, John is pleased that the work has an opportunity to reach a larger audience: “It all harks back to storytelling. The production itself was designed to fit into any entertainment space. It relies so little on any set, lighting or costume changes. The characters, the story and, in my case, the jokes were always to the fore. Translating the project into an audiobook has only strengthened these elements. The listener is in control of what they imagine. To an extent, it can be as horrific, as gory or as ridiculous and innocent as you [the listener] likes. The soundscape in the original production was paramount and it works just as well, if not better, through the new medium. Whereas I was restricted to entertaining the theatregoers who had bought a ticket on any given night, this version has the ability to be picked up and enjoyed by comedy and Dracula fans worldwide. I sincerely hope that it is.”

Tags Dracula! One Bloody Fang After Another