On June 5th filmmaker Israel Luna announced on his personal Facebook page that the film, “Ouija Warehouse” would be going into production soon. “Ouija Warehouse” is the fifth installment in Luna’s The Ouija Experiment franchise.

The first three are American films the first distributed by Viva Pictures and the other two distributed by ITN Studios, while the fourth is a foreign film distributed by MGK Multimedia. Israel independently made the first film titled, “The Ouija Experiment”, a remake of his 2002 film, “Is Anybody There?”, on a small budget of one-thousand two hundred dollars in 2013. The movie did so well in sales that ITN Studios picked up and funded the sequel, “Ouija: Resurrection” in 2014. The third film (inspired by the online Charlie Charlie craze) “Ouija 3: The Charlie Charlie Challenge” was released in 2016. The fourth installment is simply titled, “Ouija 4” and was made in Asia in 2015 and released in The United States the following year. 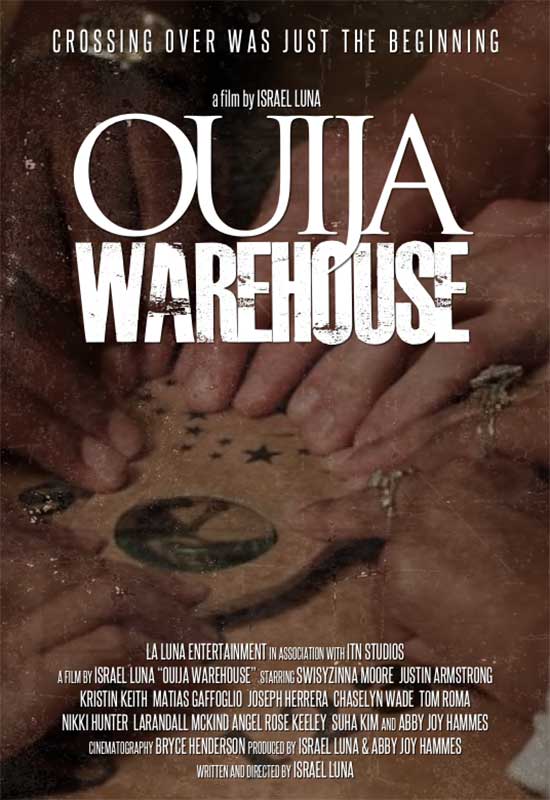 Filming for “Ouija Warehouse” began on Monday June 22nd and wrapped production on Friday June 26th. Starring in the film is: Kristin Keith, Mattias Gaffoglio, Joseph Herrera, Tom Roma, Nikki Hunter, LaRandall McKind, Suha Kim, and Abby Joy Hammes (who is also assistant directing and co-producing). Abby previously played the role of Ryder in the second installment but will be playing the role of Sarah in this installment. Swisyzinna Moore and Justin Armstrong will be reprising their roles as La’Nette and Michael from the first two films. Angel Rose Keeley and Chaselyn Wade will also be featured in the project. Chaselyn previously voiced the role of a 911 Operator and had an uncredited background role in the sequel. “Ouija Warehouse” will be Angel’s first feature film after producing and starring in the short film, “Lesbian Strippers from Hell” which coincided with a screening of Luna’s other film, “Dead Don’t Die in Dallas” in 2017.

The plot line is described as: Strange happenings occur to a group of friends as they prepare for a birthday party in a large warehouse. As Kay (Kim) and best friend Noah (Herrera) find a spirit board in a storage room, they decide to contact the dead victims who died there the year before. As they witness: strange noises, disappearing objects, and a possible portal, the friends try to piece together the hidden secrets that affect them all before it is too late.

The project will be filmed in a continuous shot (edited to appear as a single shot using long takes). Luna was inspired to do this by the early works of Alfred Hitchcock and the recent film, “1917” saying “there wasn’t any horror movies that had used this continuous shot style, so I thought I’d do it!” “Ouija Warehouse” is expected to be released as early as the end of 2020.