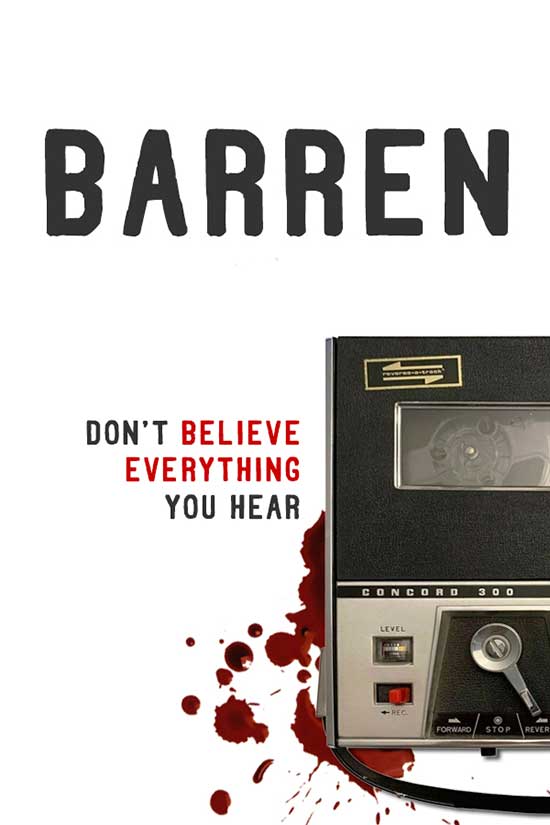 Barren, a new limited series horror podcast, follows reporter Peter Sommers as he returns to his grandparents’ farm in the wake of their death. There, he uncovers a terrifying mystery that challenges everything he knows about his family, his sanity and reality itself.

New Times described it as having “heaps of sound quality and talent” and listener reviews say Barren is “spooky fun,” “transfixing from the start” and “if you like creepy sci-fi (think Stranger Things) you’ll love this podcast.”

Created by bestselling author David Vienna, Barren is presented by Ridiculous Danger. Follow along and meet other fans by using #BarrenPodcast.

Author and screenwriter David Vienna may be known for humorous nonfiction, but his heart was always in horror. So, he created Barren, an immersive horror podcast that is terrifying and surprising listeners.

Vienna’s debut book, Calm The F*ck Down: The Only Parenting Technique You’ll Ever Need, quickly became a bestseller and other books followed. His most recent publication, Anyone Can Be President, serves as a tongue-in-cheek manual to campaigning and running the country. When the coronavirus pandemic forced everyone to self-isolate, however, Vienna took the opportunity to return to a genre that he first fell in love with at a young age.

He said, “When I was 6, I sneaked downstairs one night after my parents had gone to sleep to watch Jaws on TV. That started it for me. I’ve loved horror stories ever since.”

The idea for Barren came to him when he was still in high school. “I was reading a lot of Stephen King back then,” he said. “And my grandparents lived out in the middle of nowhere in Ohio. I thought it would be a great setting for a creepy isolation story.”

Barren tells the story of reporter Peter Sommers, who returns to his grandparents’ farm in the wake of their death. There, he uncovers a horrifying mystery that challenges everything he knows about his family, his sanity and reality itself.

The need to social distance made production of the podcast a bit challenging, but also opened up an opportunity. Because casting required actors to have their own home recording set-up, the geographic pool of potential cast members expanded. In fact, though production largely took place in L.A., one of the actors lives in Washington, D.C. “That was a cool scene because James [Rogers] and I are 3,000 miles apart, but we had to make it sound like we were in the same room.”

Planned as a limited series of 6 installments, each episode runs 20 minutes or shorter. When asked if there will be a second season, Vienna was coy. He said, “The potential is there and it’d be a blast to expand on the horrors in the existing episodes… We’ll see, I guess.”

All episodes of Barren [#BarrenPodcast] are available on Apple Podcasts, Spotify and other platforms.