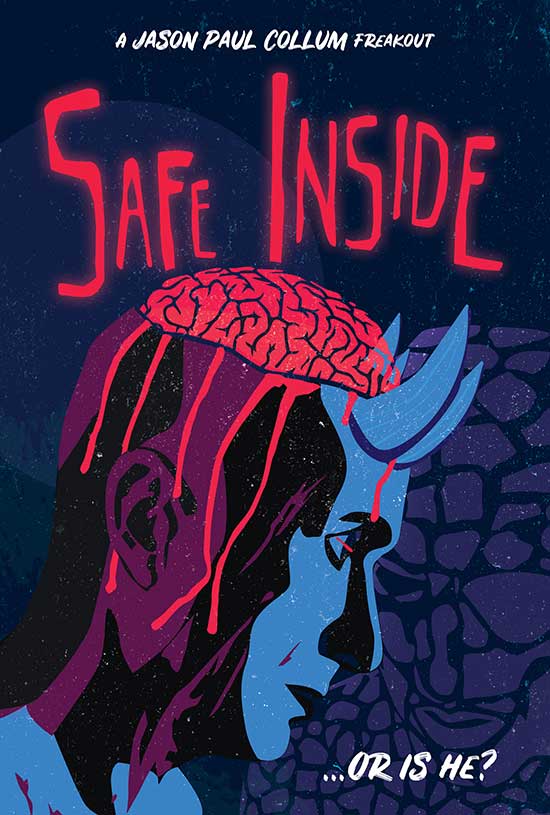 To celebrate his 25th Year as a filmmaker, writer/director Jason Paul Collum is reissuing his B+Boy™ Productions, LLC. catalog this summer through Allied Vaughn beginning with his 2017 spooky house suspenser Safe Inside. The title will street on July 9, 2020 with SRP $9.98 (DVD) and $14.98 (Bluray). (See below for links.)

The film follows a troubled man recovering from a recent breakdown. Left alone one evening in the home of his recently deceased mother, he begins to hear walls creak and sees shadows move. As the fear escalates, he begins to believe something is inside with him, but friends wonder if it’s just his psyche coming apart.

Starring Chris Harder (Extraordinary Measures), Brinke Stevens (The Slumber Party Massacre), Judith O’Dea (Night of the Living Dead), Tina Ona Paukstelis (Aswang), Darcey Vanderhoef (Mega Scorpions) and Karen Dilloo (Mark of the Devil 666), Safe Inside initially found a home with Tempe DVD after a limited theatrical release. One year later, however, Tempe had closed its doors after 30 years and Safe Inside was pulled from the market.

Reviewer Tori Danielle of PopHorror.com said of Safe Inside, “The dreadful tone reached out and grabbed me-consumed me… This one had me on the edge of my seat with my heart pounding.” Equally positive was Letterboxd.com, citing, “It has enough twists and turns to keep you all in, and I doubt you’ll see the ending coming.”

The story was emotional for director Collum to tell. “I tend to develop characters from personal experiences,” he confesses. “I’ve had many bouts with depression over the years, so much of the inner stresses and nervousness shown by lead character J.J. (Harder) were from my own battles.” The story also had an extremely painful true-life moment. “My Aunt, Roberta Vanderhoef, passed away from cancer just months before I wrote the script. The conversation between J.J. and his mother Crystal Lake (O’Dea) on her deathbed is one I’d had with my aunt in her final days. Filming it was both painful and cleansing for me. I had to leave the room after their final conversation.” 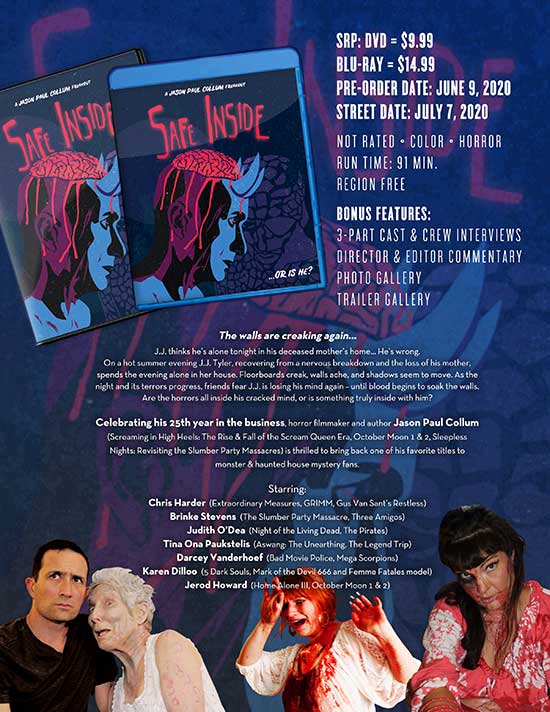 In a positive true-life twist, Collum also based the horror story on his actual house and filmed the movie there because it’s an oddity. “The house was built in 1900 and remodeled so many times it has bizarre nooks and crannies everywhere. Cupboards hide old windows, there are rooms and closets hidden within those old wood paneling walls from the 1960s, crawlspaces… Even after 15 years, I just discovered new electric outlets a few weeks ago. It never ends! And for a creepy true event, the farmer who built the home had his casket placed in the dining room for his funeral viewing. Strange things have happened here on occasion, so, just I’m just saying…. Maybe someday I’ll welcome curiosity seekers to check it out.”

This reissue comes with all-new poster art by Milwaukee artist Eric Arsnow on a double-sided wrap (excluding Amazon), a photo gallery, commentary with Collum and editor Derrick Carey, two featurettes: Are We Safe Inside and We Are Safe Inside, a behind-the-scenes reel,  and a trailer gallery featuring eight of Collum’s films.  Audio options include 2.0 Stereo Mix or 5.1 Surround Sound plus subtitles.

Safe Inside is available through most online retailers. The best prices as of July 9. 2020 seem to be the following:

Amazon is also offering both, but with a single side wrap: