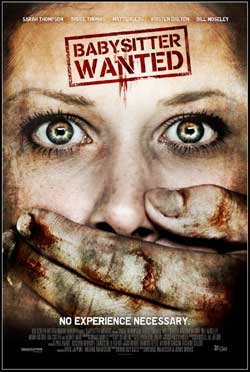 Attractive but sheltered, Angie Albright (SARAH THOMPSON) is excited to finally leave her strict religious household to attend college. While her new roommate is wilder than she’s used to, Angie soon discovers that there are far worse threats to worry about than a messy dorm room.

In horror movies, one of the most terrifying jobs portrayed is the act of babysitting kids in a setting in which is unfamiliar to them. From John Carpenter’s Halloween to Fred Walton’s When a Stranger Calls, the terrifying experience of being alone with kids while being stalked by an unknown presence sends shivers down the young women who can relate to the act of having to babysit before. Jonas Barnes and Michael Manasseri direct an excellent thriller about the horrors of babysitting, Babysitter Wanted. Not only does Babysitter Wanted incorporate some of the old elements in classic babysitter movies, but mixes scenes of torture and religious aspects that made this film stick out above the rest.

Angie Albright (Sarah Thompson) is immediately shown as a religious, sheltered young woman living with her mother. Her decision to go off to Adams College in Bakersfield for an Art History Major saddens her mother, but Angie reassures her that everything will be alright. Angie moves into her college dorm room, and encounters beer bottles and cigarette butts covering the floors and tables. A scan’tily clad roommate, Erica (Jillian Schmitz), invites her in and gives her the bad news that her bed was taken by the last roommate. Erica promises to take Angie to help find a bed, and look at the campus postings board for flyers for a bed. Through the missing person flyers, Angie notices a flyer with extra-large font that exclaims, “BABYSITTER WANTED.” She takes a number off the flyer, and immediately calls for the job.

Knowing that the job will attribute to her funds of getting a bed, she goes out to visit the family. Way out on the outskirts of town, the Stanton’s live in a white farmhouse with a grisly barn standing directly across from it. Jim Stanton (Bruce Thomas) introduces himself and his wife, Violet (Kristen Dalton), and son, Sam (Kai Caster.) Sam’s attire consists of a cowboy outfit, in which Violet explains that he never takes the clothes off, even when he sleeps. The Stanton’s show Angie around the house, and decide that she would be the perfect fit for their babysitter Friday night. When Angie leaves, she realizes that she is being followed, and is immediately fazed into a paranoid state.

When Angie returns to her dorm room, she encounters her roommate completely stoned out of her mind and, in annoyance, leaves to go to the nearest chapel to pray. When leaving, she runs into her newest friend Rick (Matt Dallas), which happens to be a religious fanatic as herself. Rick is a charming guy, and takes her out to eat. They hit it off quite well, and Rick asks her out on another date for Saturday. Angie’s day for babysitting comes up on Friday, and immediately starts off on the wrong foot when she comes back to her dorm to find a “Missing Person” flyer on her door. She goes to the local authorities, and is reassured by Chief Dinelli (Bill Moseley) that everything would be ok. Her car then proceeds to breakdown, and Rick to the rescue takes her over to the house in which she babysits.

The Stanton’s give Angie the normal babysitting spiel about what food Sam can eat, important phone numbers, how to work the TV, where the keys to the spare car are, etc. Angie feels comfortable before she starts seeing uncommon disturbances as lights going out randomly, and getting phone calls from a person who doesn’t say anything. Sam awakens from his nap, and begs Angie to cook him some dinner. She pulls out one of his labeled food containers, and is immediately disgusted by what looks like soaked diced meat in blood. Being harassed by phone calls still, she feels more and more paranoid as she sees an outline of a man outside the house.

She calls Chief Dinelli, and he tells her at one point he would do his rounds and stop by. Sam then disappears from the table, and Angie goes after him. Distraught and afraid, Angie is down to her final nerves when the intruder breaks into the house. Sam is targeted by the stranger, and Angie knocks him out when the parents return from their leave. Angie notices that the intruder is wearing a priest’s clerical collar, and is immediately confused when Sam’s hat is removed revealing two small horns protruding from his skull. The twist is on her when she finds out the whole babysitting job was a lure for fresh meat for Sam, as he only eats the flesh of young women. Escape is necessary for Angie, as she attempts by any means possible to not be dinner for Sam.

The film was written well, and had many unexpected twists that one usually does not encounter in a babysitter flick. The use of music was eerie, but some of the scare tactics scenes were unnecessary and overplayed. For example, a scene where Angie is retrieving a cup from the cabinet and she opens the curtain and you hear the loud music to a loud fortissimo seemed unneeded when it already happened moments before. The overuse of musical scare tactics seems to ruin the mood for me, and when the actual scary part happens, the anticipation was already invalid due to already being immune to the scare.

The torture scenes started off very clean cut, doing the whole tease where you think you are going to see somebody getting hit but cutting off the camera right before the actual point of impact. Towards the end, we get to see a girl being cut up as if she were being going through a slaughterhouse for animals. There are a few disturbing elements of Jim stabbing through the ankle of a victim, and then putting a meat hook through it to hang and drain the body of all its blood. There are also creepy chase scenes with the Sam the possessed devil child chasing Angie and repeating, “Hungry, Hungry, Hungry.”

One could not fight striking resemblance of Sam being a mix between Damien (Harvey Stephens) from Richard Donner’s The Omen and Danny (Danny Lloyd) from Stanley Kubrick’s The Shining. It was also interesting to see Bill Moseley in a serious good guy role, being used to seeing him in countless bad guys roles from Tobe Hooper’s The Texas Chainsaw Massacre 2 or Rob Zombie’s House of 1000 Corpses.

Barnes’s and Manasseri’s Babysitter Wanted is a refreshing look at what feels like a too familiar theme of the babysitter thriller. Angie’s struggle from being completely sheltered to having to defend herself on her own to outside elements she had not encountered before is empowering, and is a lesson of survivalist strength that only pure adrenaline can achieve. Babysitter Wanted is definitely a film for those seeking something a little bit different in the classic babysitter film, and looking for some good thrills mixed with torture. 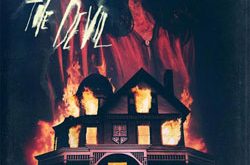