Home | The Return of Fantasy Magazine!

The Return of Fantasy Magazine! 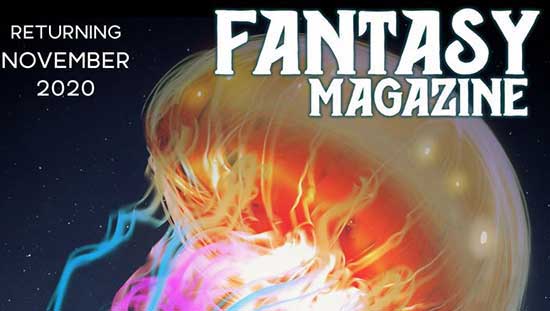 Hugo Award-winning editor/publisher John Joseph Adams is pleased to announce the return of Fantasy Magazine. The first new issue of Fantasy will publish in November 2020 and will join sister-magazines Lightspeed and Nightmare under the same publishing umbrella. Adams has named Arley Sorg and Christie Yant as co-editors-in-chief and will continue in his role as publisher. Yant will also serve as co-publisher of Fantasy—and of the other two magazines—and henceforth the publishing company that publishes all three magazines will be known as Adamant Press.

Fantasy Magazine was originally launched in 2005, published by Sean Wallace and edited by a team of Wallace and Paul Tremblay. It started as a print magazine before shifting to digital-only publication in 2007. That shift coincided with an editorial change: Paul Tremblay stepped down and was replaced by Cat Rambo, with Wallace continuing to serve as publisher and co-editor. Rambo and Wallace remained as joint editors of Fantasy until March 2011 when they both stepped down as editors and were replaced by John Joseph Adams. Adams edited Fantasy for the rest of 2011. Beginning in January 2012, Adams took over as publisher of Fantasy and its sister-magazine, Lightspeed (which he was also already editor of), and merged the two magazines together under the single title of Lightspeed. At that time, Fantasy, as an ongoing publication, went on indefinite hiatus, though it reappeared for single special issues in 2014, 2015, and 2016. The November 2020 issue will be the first new Fantasy issue in four years.

Fantasy Magazine’s format will differ slightly from its sister-magazines with its inclusion of flash fiction and poetry.  Like Nightmare and Lightspeed, Fantasy will be publishing each issue in ebook format (and offering subscription options) as well as making the contents of the magazine online for free. The first new issue to be published with Yant and Sorg as co-editors—#61—will publish November 1, 2020. For more information (including writer’s guidelines), see the Fantasy Magazine website.