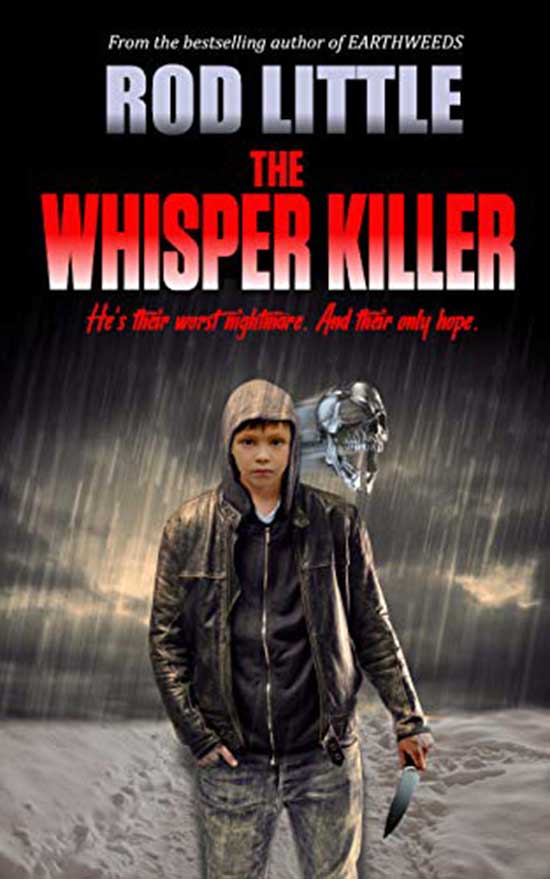 A young man named Ben, billed the Baby-Faced Killer is on the run from the FBI. While constantly on the run, looking over his shoulder and trusting no one, he finds refugee in the small town of Wolf’s Hollow. His serendipitous stay may turn out to be critical for each of the residents. Something sinister lurks within the midst. Will Ben’s presence be enough to forever silence the wraith of a maniacal convict? A bloodbath awakened speaks volumes in The Whisper Killer.

When I’d initially picked up Whisper Killer, I must confess I was a little reluctant. The opening sequence didn’t pop with me the way I’d hoped. The title within itself seemed awkward, clunky, and not at all cohesive with what I look for in an entertaining read. I set aside Rod Little’s endeavor for a few days with best of intention of getting back to it when I could.

A few days had lapsed, then a few more. Things we put upon the back burner grow in volume and intensity. There lied a very real possibility Whisper Killer would get lost in the shuffle with only the faint echo of opportunity in resurgence.

I’d realized the premise of the tale was certainly alluring enough. The stylistic prose of author Rod Little provided plenty of enchantment. At last I succumbed to the very fact sometimes a story simply doesn’t resonate at certain times simply because the story waits for us when we need it most.

The town of Wolf’s Hollow is a critical element in composing effective character development. The sleepy hollow takes on a life of its own. Few readers will argue the village is a character in its own right within the tale. Somehow the locale beckons young Ben, on the run. He discovers the location entirely by accident. As he gets acquainted with the residents’ he realizes the town needs him every bit as much as he needs the town. This sentiment hit close to home with me. Forever the vagabond, emotional drifter looking for a place to belong. Suffice to say author Rod Little managed to resurrect my curious wonderment within the pages and I delved on in with ravenous vigor.

An enticement of just how a serial killer, an ostracized convict and an evil entity are associated provides suspended intrigue for the reading audience. We crave to know exactly how each of the plights are fashioned and eventually interwoven together. The author does an exceptional job of providing just the right measure of suspense to keep the readers invested in the story.

For the most part exposition is rather elusive. We charter a short detour with a character named Caleb within the first act. The trip down memory lane is essential however in establishing motive and enhancing Caleb’s conflict. Most impressive is the method in which the author executes the scenes, providing plenty of innuendo and possibility. Rod Little seems to have a firm grasp on what readers want on a deep seeded psychological level.

The anti-hero of Ben is the most impressive conception. To create a protagonist with such a ghastly past that readers will readily empathize with is no easy feat. Yet this storyteller manages to gradually break down the walls of this complex character and we seem to like him almost in spite of ourselves.

Ben’s relation to his inner demon Jack provides comedic levity in an otherwise tense setting. Just when we think the youth’s diabolical deeds of yesterday makes him blood lust if not predictable, we see another side of what moves him within. He wants desperately to belong in Wolf’s Hollow and resists despite all the writing on the wall that suggests the contrary.

The reoccurring theme of the elk as seen by Ben in varying circumstances is fascinating. A totem of endurance and patience, our main character is best advised to realize the significance of its presence. The thrill of the hunt for predator and prey had merely begun.

Overall Whisper Killer was an exceptional reading odyssey. Few can argue we currently reside in unprecedented times. Days of uncertainty. Alienation, isolation. It doesn’t take long to fully comprehend the dilemmas in which Ben had gone through. The novel provides a vicarious escape, a detour from our own realities and I personally thank author Rod Little for providing the boarding pass for the destination known as Whisper Killer