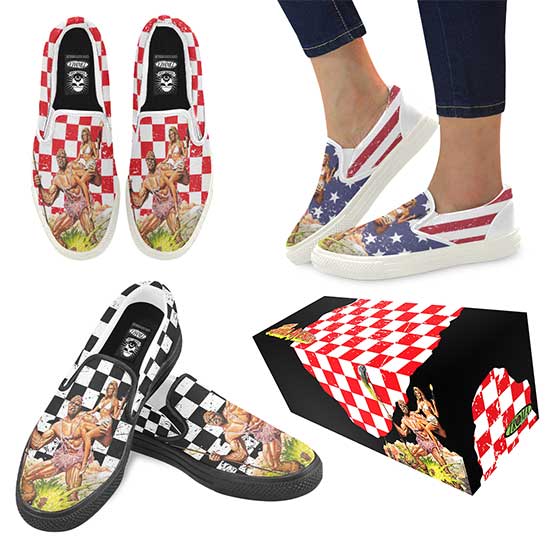 These slip ons are a very limited with only 300 total pairs available. Each pair will come in a hand numbered shoe box, indicating its numerical order. They will also come with an exclusive trading card that is hand numbered as well and a Toxie shot glass. The shoes have three different color combinations and kid’s sizes are also available. The going price for these sick kicks is $60, and you can only get them at BigHerc.com. Speaking of which, you should make certain to bookmark and visit BigHerc.com often because he’s got some more exclusive merchandise coming our way from both “The Toxic Avengers,” and “Toxic Crusaders” brands, in the very near future. Stay tuned!

Born and raised in the windy city, Chicago, Big Herc is a veteran artist and presence in the hip-hop community. Along with a strong passion for music, Big Herc also has a love for video games, animation and pop culture. Big Herc has worked with some of music’s biggest names including Cypress Hill, Ice-T, Slipknot, Schoolly D, Ras Kass, DAS EFX and DJ Premier. Along with the current “Big Herc x Toxie” line of items, his pop culture merchandising collaborations also include Taito and Square Enix’s 1970’s arcade game, “Space Invaders.”