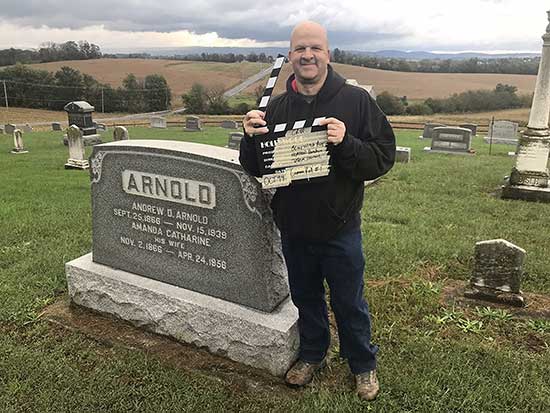 Writer/ Director Jeff Seemann took some time to talk with Horrornews.net about his film upcoming film, On Location, which he will begin shooting once the pandemic ends and the world is open and safe again. Jeff talks about his love of Horror movie locations, his first memory of seeing Friday the 13th at the drive-in movie theatre and much more. Check out Jeff’s interview.

Hi Jeff, it’s great to talk to you. Tell us about On Location and how this idea manifested for you?

Jeff- Thank you very much. I’ve been a horror movie fan my entire life. I’ve always been a little bit obsessed with going to the locations where they were filmed. I’d say the first one that I did as a major event was four years ago, I went to Burkittsville, Maryland where they filmed The Blair Witch Project. Matt Blazi runs the tour. He’s run The Blair Witch Experience and he wrote a book called, Eight Days in the Woods about the making of The Blair Witch Project. The guy just put on a great tour, showed us every single detail. Since that’s one of my favorite horror movies of all-time, it was a lot of fun. On the drive home, it was a nine-hour drive for me. I just starting thinking and you make the jokes, what if there is something in the woods? On the drive home, I started thinking, what would be the worst-case scenario for somebody that was at one of these horror movie sights and it turns out it wasn’t a horror movie, that it was real. That’s where On Location was born. The story behind is that George and his five friends start a business where they offer guided tours and they turn it into a fulltime business until they find that one location where the horror is real. Matt is my “George” character, I wrote George straight off of Matt’s character. He is one of those likeable guys that just loves horror movies. Matt knows this. Then I went to Blairstown, New Jersey. I won a tour for Friday The 13th to see Camp Crystal Lake and the script just exploded from there. I had every piece of knowledge that I wanted. 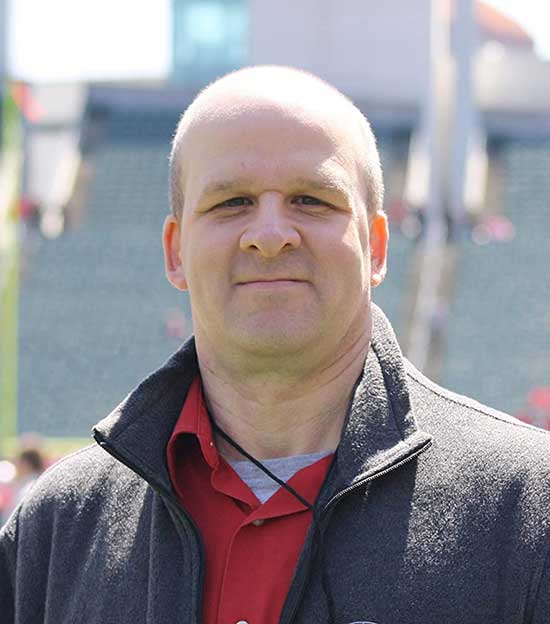 On Location, you have an excellent cast, Hannah Fierman, Damian Maffei, Chaney Morrow, L.C. Holt, Carol Ann Van Natten. Some of them are legends already in the horror world and amazing actors.

Jeff- I’ll tell you who might be the best actor out of all them, Chaney Morrow. I’ve worked with him on three films now and I’ve seen him in action and he’s incredible. I’ve never been side by side with L.C. or Hannah when they work but they are both amazing actors. I am excited to take on the role of Eli. Damian and I worked on The Strangers: Prey at Night together but, we never saw each other onset. So, technically we didn’t work together on the film, we just worked on the same film at different times. I got to know Damian on Haunt. I did ten days on the Haunt movie. Damian is the one that got us Felissa Rose and he recommended Hannah and L.C. So, without Damian Maffei, I don’t have these assets for this movie so I owe a tremendous debt to this man… Now, that I said that, he’s going to call me out on that favor isn’t he.

Many of us are working from home and some people are going to work, healthcare workers and truck drivers etc. (AND THANK YOU TO ALL OF YOU) I know it takes a lot to make a movie. How do you think you are going to get this going when things go back to “normal” so to speak? This is challenging with the pandemic happening.

Jeff- Welp, we have five out of town people. Everyone else on the cast and crew are close enough to drive. We could probably shoot a few things while we are in the pandemic but, we made the decision to scrap the whole thing and push it until it was safe. We are not going to risk it. Preparation for it won’t take much. We’ve set a tentative date to get back to set and shoot, when I say tentative, I mean extremely tentative. If anything is still close to what we are seeing now, we will push the date. We are extremely excited to make this film but no movie is worth the health and safety of any single crew, cast member or elderly grandparent. If someone were to catch something, I could never live with myself. No movie is worth that. 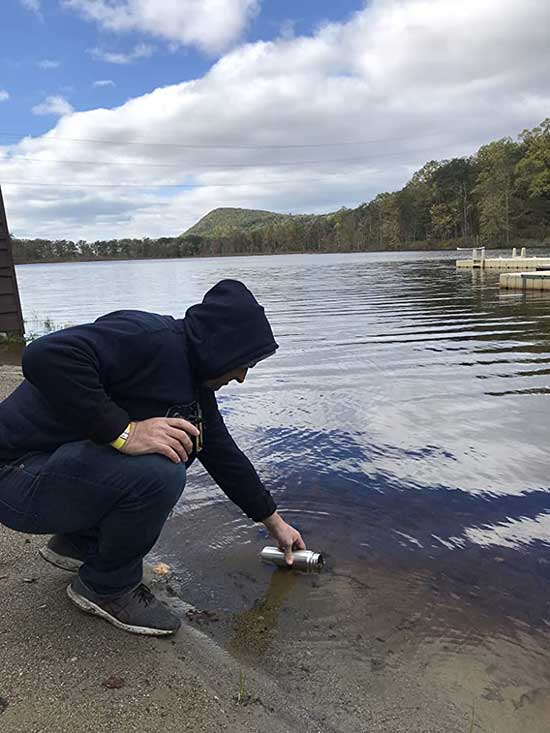 No way, not at all. I think you are making the right choice.

Jeff- There is plenty to do in the meantime.

I grew up watching horror movies my entire life. They have been an escape. My friends all watched horror movies at our house. (My mom is an artist and a nurse and she sees stuff as art) I find it fascinating that you are doing this movie and making it about locations because when you think about it, a lot of places are a huge part of these movies. The house in Psycho, the Amityville House (I had a teacher who lived near that house) I can name a million things and places that stand out as a character on its own in a movie. So, I find this fascinating that you are making this movie. The point to my rambling is that these places and houses become characters within the films.

Jeff- Exactly! Man, that’s perfect. When I went to Camp Crystal Lake, it was phenomenal. You felt like you were part of the movie. To call it a character in the movie, that’s 100% accurate, it’s an iconic location.  The mall in Dawn of the Dead, Camp Crystal Lake, and Burkittsville, Maryland. They take on a life of their own. The location itself makes all the difference. Thank you for saying that by the way, that’s classic. I’m going to use that. 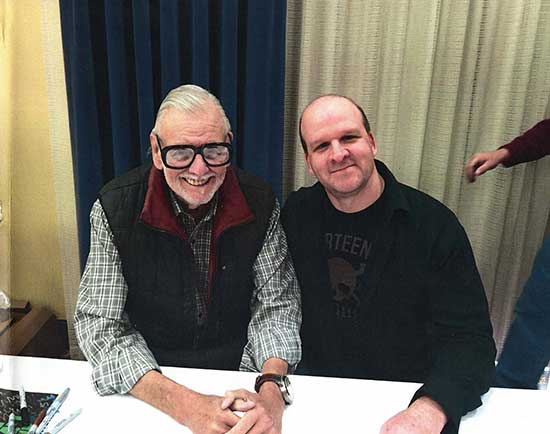 Feel free to use it but even the apartment in Rosemary’s Baby, I have been watching that movie lately. The Addams Family house, the house in The Texas Chainsaw Massacre and even the haunted attraction in Haunt is sort of a character.

Jeff- I agree, I’ve been to the Dakota in New York City and there’s all these people lined up to take their photo where John Lennon was shot. I’m looking at it going that’s the building in Rosemary’s Baby so I’m glad you brought that up.

Do you have a favorite location that you have visited so far?

Okay, a lot of us love special effects and behind the scenes stuff. So, tell us a little bit about who will working with you On Location? I know you can’t give away too much but….

Jeff- We brought on, Gabby Leithsceal (Haunt, Extremely Wicked, Shockingly Evil and Vile) to do our special makeup effects. She’s phenomenal, she and I have worked together on several movies. The woman knows her blood. Without giving anything away, I’m going to leave it in Gabby’s hands.

Have you always been a horror fan and how did you get into watching horror movies?

Jeff- Mom and dad, when I was a teenager, didn’t stop me from watching horror movies. Till this day, mom actually watched horror movies herself, she’ll call me up out of the blue and ask me for a recommendation. But, when I was eleven my dad was a big Mel Brooks fan and as a result, so am I. I adopted his philosophy on comedies, the man could quote Caddyshack and Young Frankenstein like there’s no tomorrow. We went to see a Mel Brooks film at a drive-in movie theatre. Back in those days, drive-in movie theatres were multiplex theatres, there were four or five screens at some places. So, we’re in the car and I’m in the backseat listening and watching this Mel Brooks movie and on the screen to the right, out my window was, Friday the 13th. I got to see about twenty minutes of it as an eleven-year-old child before my mom turned around to see me looking out the side window and of course, there was a naked girl on the screen when she noticed. They moved the car a little closer to the screen of the movie we were watching and I couldn’t see it anymore. But that was my initiation into horror films. They never really, other than that rejected my desire to watch horror. So, I got into it a little bit, it developed a lot more when I was in my early twenties and I worked at a video store. It had a great horror section so; I would take something home every night when I worked. I got a really good education into horror back then. I don’t know if cathartic is the right word but I liked that feeling of fear and I liked that feeling of dread that was happening whenever I saw these movies. This is the explanation that I give to a lot of people who don’t watch horror and want to know why I do. When I watch those horror movies, all of the negative feelings that I have disappears when I watch these movies.

I agree with that and I would say horror movies can be cathartic and they can be an escape. They are just fun movies to watch.

Jeff- Yes, I love the rollercoaster ride of all it too.

Yes indeed. I thank you so much for taking the time to talk with Horrornews.net. I cannot wait to see On Location. Thank you and stay safe.

Jeff- Me too, I can’t wait to see it too. Thank you. I appreciate it. You stay and healthy.