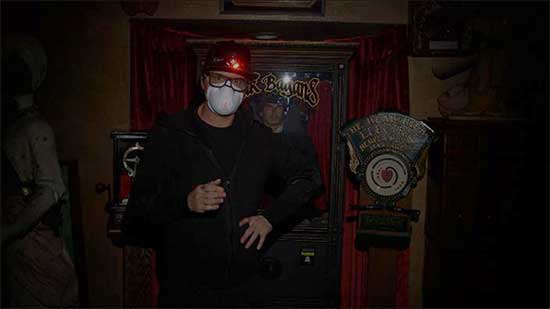 In “Buried Worlds with Don Wildman,” the iconic Travel Channel host takes his thirst for adventure into terrifying new territory to explore mankind’s darkest mysteries. On a mission of a more cryptic sort, heading to remote regions of Peru, Haiti, Bulgaria and beyond – Wildman joins in taboo rituals, comes face-to-face with paranormal entities and witnesses deadly practices, seeking out the darkest legends in the world and experiencing them for himself. [Hour-long episodes]

Don Wildman begins his adventure by traveling to Eastern Europe to discover the truth behind the haunting stories of vampires that still linger and torment rural Bulgarian towns. He joins a group of active vampire hunters as they investigate an abandoned village terrorized by vampires and uncovers what looks to be the tomb of one of them. He continues his journey by diving into the history of these beings, not only in Bulgaria, but in Hungary as well. As Wildman discovers the dark past of vampires and witches, he is given the opportunity to contact the spirits of those who have passed, with the help of a modern-day witch. To bring his adventure full circle, he explores the dark truth of the infamous Count Dracula.

Don Wildman travels to Haiti to experience the mysterious power of voodoo. He gains access to a bloody sacrifice and learns the terrifying truth about zombies. Back in New Orleans, he witnesses a top-secret ritual as one man is possessed by the God of Death.

It’s widely believed that supernatural entities feed off of fear, and the greater the fear, the more dangerous spirits become. Travel Channel’s special four-part miniseries “Ghost Adventures: Quarantine,” tests the theory firsthand, as Zak Bagans, Aaron Goodwin, Jay Wasley and Billy Tolley quarantine themselves for two weeks inside Zak Bagans’ Haunted Museum in Las Vegas. In a frightening expose filmed entirely by the guys without a production crew, the team – maintaining proper social distance practices amid the coronavirus pandemic – discover how heightened levels of fear in this unprecedented time impact the dark energies attached to the world’s most haunted objects. And in a highly anticipated moment, Bagans finally opens the infamous Dybbuk Box to investigate its sinister influence. [Hour-long specials]

The “Ghost Adventures” crew begins their unprecedented lockdown at Zak Bagans’ Haunted Museum to monitor paranormal activity inside the shuttered building during the COVID-19 pandemic. The guys hit the ground running as they investigate demonic dolls and the room that houses Jack Kevorkian’s death van.

The “Ghost Adventures” crew continues their lockdown at Zak Bagans’ Haunted Museum during the COVID-19 pandemic. The guys confront pure evil as they investigate the dark corridors of the infamous basement and the room where Bagans displays his collection of serial killer artifacts.

In “The Holzer Files,” a dedicated paranormal team – led by investigator Dave Schrader, psychic medium Cindy Kaza and equipment technician Shane Pittman – investigate terrifying true hauntings from the recently discovered case files of America’s first ghost hunter, Dr. Hans Holzer. Exclusively reopening Holzer’s most captivating case files for the first time, they dig into thousands of documents, letters, photographs and chilling audio and visual recordings dating back to the 1950s. In this special episode, the team looks back together at some of their scariest, most insane and sometimes outrageous moments to date. Plus, they’ll answer burning viewer-submitted questions, give insider information and insights and even offer up some new, never-before-seen footage and evidence.

DESTINATION FEAR: BEHIND THE SCREAMS

“Destination Fear” is a haunted road trip turned terrifying sleepover. Brother and sister duo, Dakota Laden and Chelsea Laden, best friend Tanner Wiseman and friend and camera operator Alex Schroeder, confront their fears as they pile into their RV and hit the road on a nail-biting cross-country journey to pursue paranormal evidence, spending the night inside America’s most haunted abandoned buildings. In this special episode hosted by Dave Schrader – Dakota, Chelsea, Tanner and Alex look back together at some of their scariest, most insane and sometimes outrageous moments to date. Plus, they’ll answer burning viewer-submitted questions, give insider information and insights and even offer up some bonus footage and evidence.

Paranormal witnesses recount terrifying true tales of violent hauntings that have plagued their nightmares since childhood. Now adults, they go back in time to the horrific encounters with compelling first-person testimonies. [Hour-long episodes]

Paranormal entities go to great lengths to trap their prey. A shape-shifting creature stalks a young girl, a boy fears he has no one to turn to when he begins to see shadow people and two friends are terrorized by an evil spirit.

Demonic entities seek control of their victims through possession. An evil spirit follows a father and daughter home from church, cousins unleash hell when they play with a spirit board and shadowy creatures wreak havoc on a girl’s life.

Some of the most amazing, eye-opening and downright scary paranormal videos from around the world are featured as a panel of experts breaks down the footage and analyzes what exactly the eyewitnesses captured. Insights from some of the most knowledgeable specialists in the field and firsthand accounts from the people lucky enough – or perhaps unlucky enough – to witness these strange phenomena for themselves just might make a believer of even the biggest skeptics out there. [Hour-long episodes]

A man searches for answers after he spots a reptilian creature in Thailand, a baby has a terrifying encounter with a ghost and a war-torn ship yields a haunting message.

A shadow figure is spotted in a desolate graveyard, a Hong Kong family is perplexed by a radiating light in the evening sky and a couple opens their arms to all things otherworldly.