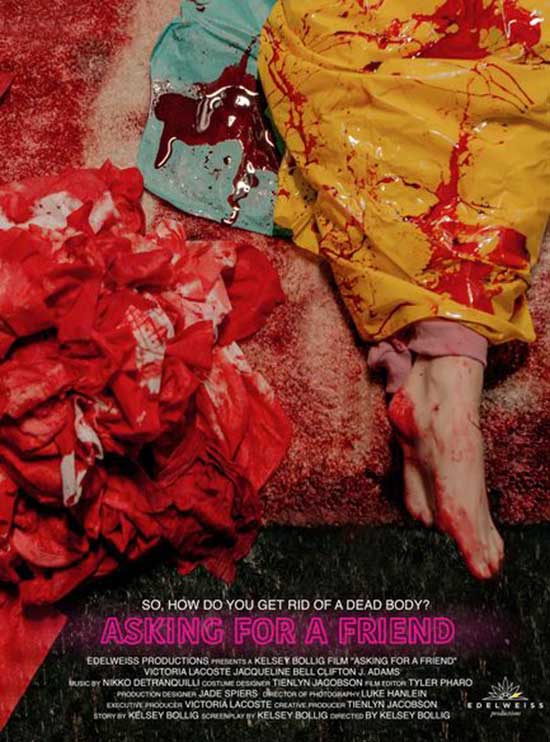 Women Can Be Psychopaths Too.

With 15 wins and countless nominations, Edelweiss Film Productions is proud to announce that the award-winning dark comedy Asking For A Friend will be premiering online on June 10th on Gunpowder & Sky’s Horror Platform, Alter

Blake and Q are childhood best friends, roommates, and soulmates. After a long day, Blake’s one-track mind is set on the nachos Q has promised to make. Aside from nachos, however, Q has also managed to unexpectedly kill someone in their apartment.

Through a series of heavily graphic and hilarious situations, the girls attempt to tap their inner serial killers and handle the body themselves. What happens next is a visually surreal, musically fluid journey complete with blood raves, a creative use for slip n’ slides, and a body that for whatever reason won’t stop bleeding.

A FEMINIST TAKE ON MURDER:

Because the two friends getting rid of the body were women, writer/director Kelsey Bollig knew the victim had to be a woman too.

“It takes the question of whether she is fucking some guy out of the story, which in film, is the basis of so many kills. I wanted this to be entirely free from the somewhat narrow motives female killers are generally given in film” — Bollig

While there are countless strong female characters – and even heroines within the horror genre, most female characters are still either killing out of revenge or using their sexuality. Bollig wanted her characters to have deeper motives – or even no motive at all.

“Women can be unemotional psychopaths too. I think it’s time we make that clear.” — Bollig

“This is a feminist story because this is my idea of strong women. They own their womanhood and they lift eachother up no matter what. The friendship between these two women is the glue of the entire story. It’s women helping women to the extreme.”

ON SEXUALITY IN FILM:

“I didn’t want to sexualize either of the main female characters for the audience, but I still wanted them to own their womanhood. To me, feminism doesn’t have to be directly addressed to exist in film. To get concepts of equality across, you sometimes just have to make your characters exist in a world where it’s already the standard.” — Bollig

WORKING AS A WOMAN IN A MALE-DOMINATED GENRE:

While Bollig didn’t enter horror or filmmaking to prove a point or pave the way for women in a male dominated industry, she considers it a plus.

“Horror is a powerful tool to point out the flaws of our society while poking fun at them at the same time, which is why I think it’s so important to add the female perspective.” — Bollig

Asking For A Friend was Executive Produced by Edelweiss Film Productions, an all female-run film production company whose focus is to work with and amplify the voice of up-and-coming female writers and directors.

Considered to be one of the bloodiest films in the 2019 festival circuit, Asking For A Friend used over 60 gallons of fake blood, going mostly towards the now infamous body dismemberment scene and a blood rave scene.

Asking For A Friend’s body dismemberment scene is so graphic, it noticeably affected audience members – from spilled wine to rushing out of theatres to one audience member literally losing their lunch.

Tags Asking For A Friend