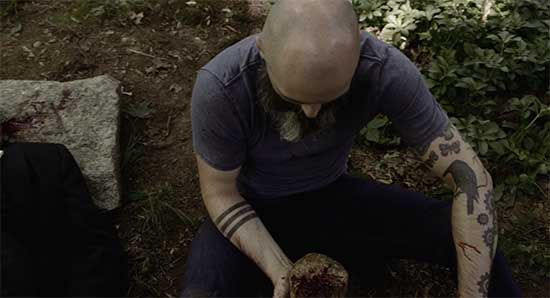 From Shootie HG (Vocalist & composer of OSTs for Devil May Cry, Dead Rising, and Final Fantasy video games) and Skip Shea (writer & director of AVE MARIA, TRINITY and SEEDS) comes the pilot of the PRIEST HUNTER series they have in pre-production.
Origins: Shootie approached Shea while were working on Shea’s TRINITY and pitched the idea of PRIEST HUNTER – a concept that would combine Shea’s trademark of tackling clergy sexual abuse themes through movies with Shootie’s music.
“I thought about Skip as a reluctant vigilante in a fantasy scenario,” said Shootie. “The dark, strong, yet righteous theme also inspired me to compose the music for the pilot.”
“I loved the idea of combining our work,” said Shea. “I think Shootie’s music behind this pushed me to write a new level of violence than hasn’t been seen since my short films MICROCINEMA and AVE MARIA. But also to explore how a character deals with the reluctance of his role as a vigilante and how he grows more comfortable with it.”
Co-written by the pair, PRIEST HUNTER is about Dan, who has recently been released from a mental hospital and lands a caretaker job rehabbing an old abandoned property owned by the Catholic Diocese, with the help of his mother Claire and Father Daugherty.
Very soon Dan starts hearing a child’s voice that directs him to an old file cabinet that holds the files of every pedophile priest that has served in the area. The child begs Dan to exact revenge. He takes the first file he discovers, that of Father Bob, and decides to confront him.
The pilot, starring Damien Gaudet and Dynamo Marz, can be viewed here: